Everywhere I go these days I’m invited to take part in a survey.
A little man thrust a business card in my hand at the supermarket and said to log on to their website and add my comments on my shopping experience.
Another gave me a whole ream of paper chits with my receipt, discounts for things I would never buy, outings for children I haven’t got and holidays I cannot afford.
‘Sign in to our website and you could win £100 in shopping vouchers’ was the running narrative on the back of my receipt. In truth, I don’t frequent this particular store all that often, and the thought of finding £100 worth of things in it that would appeal to me was laughable.

We have also been sent 2 survey emails from our car dealer about the service we received when the car was …… er …….serviced AND we get the occasional message from companies we have never dealt with at all who have been sent our details by someone else even though we ticked (or not, as we do actually read the small print) all relevant boxes to say NO to advertising promotions and literature. 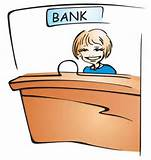 The bank I worked for years ago had a staff survey every couple of years or so. The idea was to get feedback from the workers about company policy, holiday entitlement, wages, working conditions and management amongst other things, with little circles to be filled in according to your opinion. The options were:
Very Unsatisfied,
Unsatisfied,
Neither Unsatisfied or Satisfied,
Satisfied, or
Very Satisfied.

But further along this changed to
Strongly Disagree,
Disagree,
Neither Disagree or Agree,
Agree,
Strongly Agree.

The survey was about thirty pages long (I kid you not) and the questions repeated two or three times with slightly different wording so that eventually the Big Bosses would get the answers they wanted.

We were assured that we were all anonymous and the ‘totally independent company who analysed the results’ were a third party but I don’t think anyone put Very Satisfied or Strongly Agree in their belief against that one.
It would not take Brains of Britain to narrow down an individual from their age, sex, department, geographic area, ethnic origin, time with the company and whether or not they held a supervisory position, as requested in the ‘general details’ on page one of the booklet.

I used to enjoy doing surveys actually, putting my voice and five eggs worth in print in the hope of getting something done or put right. I seem to have the ‘right face’ for interviewers to pounce on me in the street. Either that or I’m wearing an invisible ‘Ask Me!’ jumper.

In the early ’90s, a group were doing a survey in one of the parks in Poole and one of the questions was about improvements therein. I’m not sure exactly what my lassie expected me to say, but more dog bins was definitely not on the tick list, yet this was a public park where people could walk their dogs, and there were no doggy waste disposal bins (or any other bins for that matter) in sight. She recorded my comment in ‘Other’.
Maybe it was this, or maybe it was already in the pipeline, but a few months later, there were five shiny new red doggy bins along the pathways in that particular park and a variety of litter bins.

Today though, I’m sick of seeing them as they pop up like weeds in a flower bed. 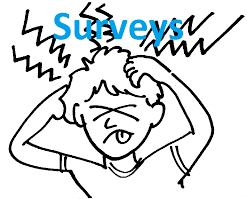 The Organisers assume that everyone has access to the Internet and various websites, or we are prepared to ring some obscure number running up our phone bill and their profits just by making the call.
To claim a prize, you have to ring one of the Premium Numbers at £1 a minute plus and be kept on hold for at least fifteen minutes. The prize is likely to have cost a couple of quid, so you don’t actually win anything.

Now the NHS is getting on the bandwagon, and I have been asked to take part in a survey regarding my recent dental treatment. My options were easy, Yes or No, obviously so that it won’t be too taxing an exercise for the analysing company who are probably new to the game.
I only had a check up, the appointment having been made six months ago at my last one, and the next one now scheduled in their diary for April. But why did they single me out rather than Hubby? His file is much more interesting than mine!
OK, the prepaid envelope was to a third party, but there was a neat little icon on my reply sheet that identifies me as I had to confirm my name and date of birth as it appeared on the covering letter. Nothing is sacred, not even my teeth it would appear. 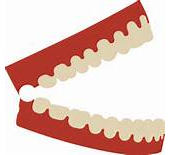 No doubt leaflets and special offers for dentures I don’t need will shortly follow.

I am now waiting for the one for my Diabetes Eye Screening to hit the mat.
Oh boy, am I going to have some fun with that one. My doctor’s surgery receptionist said I was unable to make an appointment through them or the hospital where the screening will be carried out and I would have to ring the 0300 number (not one of the FREE lines) to make an appointment. When I explained I only have a mobile phone and reception on the boat is iffy at best, she said she was sorry, there was nothing she could do, and that I would have to contact the department who sent the letter.
Today, I went into the hospital where the mobile screening unit is going to be for the next couple of months, and spoke to a LOVELY lady on reception. I explained the problem, and although she was very apologetic at not being able to make me an appointment, she called the number for me, we got it sorted and my December appointment will be confirmed by post.

Now why couldn’t my doctor’s receptionist have done that?

I am a retired number cruncher with a vivid imagination and wacky sense of humour which extends to short stories and poetry. I love to cook and am a bit of a dog whisperer as I get on better with them than people sometimes! We have an elderly dog called Maggie who adopted us as a 7 week old pup in March 2005. From 2014 to 2017 'Home' was a 41 foot narrow boat where we made strong friendships both on and off the water. We were close to nature enjoying swan and duck families for neighbours, and it was a fascinating chapter in our lives. We now reside in a small bungalow on the Lincolnshire coast where we have forged new friendships and interests.
View all posts by pensitivity101 →
This entry was posted in diary, health, humour, My life, Opinions, Uncategorized and tagged NHS, opinions, shopping. Bookmark the permalink.

6 Responses to Survey for Survey’s sake