A Day at the Beach

Not that I got out the swimming gear or intended to go paddling, but on such a beautiful day and with the fence finished, a reward was in order, so we piled up the dogs and ourselves in MOH’s car and set off for Weston Super Mare.

I don’t think I have ever visited WSM when the tide’s in, and in the summer months, dogs are not allowed on the main beach.
However where we go, the dogs could roam and play in abandon, and Maggie was like a puppy running along the sand fetching her lead which we’d tied into a ball as we didn’t have anything else to throw.

Where does the sky stop and the water start?

There were some sand gliders there today so we kept out of their way and walked up to the yacht club in the hope of getting a cup of tea.
In case we were challenged about being boat owners, we could honestly say we had a 41 footer and just hope they didn’t ask how many sails.
However, it didn’t happen as they were shut. 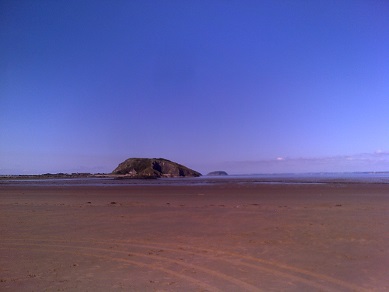 Steep Holm and Flat Holm are small limestone islands in the Bristol Channel off Weston Super Mare’s bay (WIKI for links).
Flatholm has a lighthouse on it and a now derelict sanatorium which was built in 1896 to house cholera patients.

Looking over towards Weston Super Mare

From here, we drove into Weston Super Mare itself, and the town was PACKED.
We were however lucky to find a parking place by the gardens, got ourselves some lunch which we ate in the car, and then walked around for about an hour, treating ourselves to one of the best Rum ‘n’ Raisin ice creams I have ever tasted.

We got home just after 4pm, and haven’t heard a peep out of the dogs since!

I am a retired number cruncher with a vivid imagination and wacky sense of humour which extends to short stories and poetry. I love to cook and am a bit of a dog whisperer as I get on better with them than people sometimes! In November 2020, we lost our beloved Maggie who adopted us as a 7 week old pup in March 2005. We decided to have a photo put on canvas as we had for her predecessor Barney. We now have three pictures of our fur babies on the wall as we found a snapshot of Kizzy, my GSD when Hubby and I first met so had hers done too. On February 24th 2022 we were blessed to find Maya, a 13 week old GSD pup who has made her own place in our hearts. You can follow our training methods, photos and her growth in my blog posts. From 2014 to 2017 'Home' was a 41 foot narrow boat where we made strong friendships both on and off the water. We were close to nature enjoying swan and duck families for neighbours, and it was a fascinating chapter in our lives. We now reside in a small bungalow on the Lincolnshire coast where we have forged new friendships and interests.
View all posts by pensitivity101 →
This entry was posted in Dogs, numbers, observations, Uncategorized and tagged beach, fun, history, sands, Weston Super Mare. Bookmark the permalink.

9 Responses to A Day at the Beach