We are staying with MOH for a few days so Hubby offered to help him put his fence up. We believed it was going to be a case of several panels like we had in the cottage, posts, a load of nails and a spirit level.
That would be a No then.

To fill you in, MOH’s neighbour is trying to sell his house, and as it’s up a little lane that runs along the boundary of MOH’s property, he offered to pay for the fencing to improve the kerb appeal up to his to increase the odds of finding a buyer. 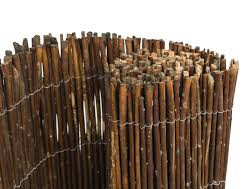 This is what arrived. Three rolls to be exact of willow fence screening, each 16 feet and 4 inches long at a height of 4 feet (ish).
I was immediately dispatched to purchase a 50 metre roll of 1mm thick garden wire from the garden centre about 5 miles away. It later became my job on the ‘production line’ to cut it into 5 inch lengths (about 150 in all, so there is plenty left over).

I apologise in advance for the following sequence of puns and one liner quips, but my title did warn you:

As I was snipping away with the cutters, Hubby said ‘May the Force be with you.’
I answered that today was the 4th of September, not May.

Apparently, one batch of my efforts were too short, so I apologised for my
method going a little haywire.

The houseowner concerned came to have look at how the job was progressing.
I was in the middle of measuring the distance left to do compared with the amount of fencing we had left, so asked him to put his finger on the spot where my 10 foot long tape measure finished so that I could continue. He told me he would charge me by the finger, to which I replied I’d be charging him by the foot.

He was also curious about our relationship, and was somewhat stunned when we said our friend was My Other Husband, having been promoted from The Boyfriend some time ago.

He wanted to know how it was all working out.
I said brilliantly.
(I should have kept this going as it was obvious he was thinking along different lines to friendship).

Hubby was getting a bit tied up with the black plastic tie wraps he was using to secure the roll to the posts.

He was also branching out on the other side of the fence fighting a hydrangea bush as well as the hedge itself.

Hubby and I nearly flipped when we discovered one roll was the wrong way round, so had to unpick about 5 feet of work to turn it over.

I was correct in my visual calculation that we were about four feet short of the gap.
Measurements had been taken by counting the number of original 6 foot wide panels and multiplying the two figures. This came to 48 feet, so 3 rolls of the willow screening 16 ft 4 inch would be sufficient.

Not.  (We felt like weeping here)
What hadn’t been taken into account was the 4 inch wide posts that each panel was nailed to, so we were in fact 9 x 4″ adrift, the rest of the shortage due to overlapping when joining two rolls together.

The job is almost finished, and Hubby has a plan.
We have confirmed that MOH has a drill, a hammer and a saw.
Tomorrow the guys are going shopping while I dog sit and get creative in the kitchen.
Hubby is already shaking as it means I shall be let loose with a sharp knife and carrots!

Note:
Our houseowner may have paid for the materials, but apart from sticking his finger where I asked him to, did nothing to help us.

Additional note 18th October.
Mr Houseowner now has a buyer for his house, so I guess going on the ‘offensive’ was a good plan afterall.

I am a retired number cruncher with a vivid imagination and wacky sense of humour which extends to short stories and poetry. I love to cook and am a bit of a dog whisperer as I get on better with them than people sometimes! We have an elderly dog called Maggie who adopted us as a 7 week old pup in March 2005. From 2014 to 2017 'Home' was a 41 foot narrow boat where we made strong friendships both on and off the water. We were close to nature enjoying swan and duck families for neighbours, and it was a fascinating chapter in our lives. We now reside in a small bungalow on the Lincolnshire coast where we have forged new friendships and interests.
View all posts by pensitivity101 →
This entry was posted in budgets, Friend and Family, humour, Relationships, tongue in cheek, Uncategorized and tagged Fencing, jokes, problem, willow screening, work. Bookmark the permalink.