It’s a wet Bank Holiday, so we won’t be going out very much today.
Hubby took Maggie up for her first wee of the day around 8am, he clad in the black waterproofs and she in her little jacket and rainproof cover.
I got up, made sure a towel was on deck for their return, and got the hairdryer out just in case. Hubs hasn’t enough hair to warrant it, but Maggie loves being dried off this way.

Looking at the radar picture, the UK is under a blanket of dark green so the wet stuff is going to be with us for a while. The question is what to do.

When we were in the house, on rainy days I’d either bake or get my kit out and make some cards. With such limited space on the boat, the latter is awkward and cumbersome, and I still haven’t used the cooker or grill, as most of the things I cook only require the hob and possibly the microwave. Tonight is sweet and sour and thus I shall only be using 2 saucepans.

Maggie is a creature of habit, and no matter what time her first wee is, about an hour and a half thereafter it’s time for another, but even she’s not keen to go out again.
In fact, she’s been curled up literally alongside me, her nose under my elbow, and a foot intermittently rests on the keypad sending my cursor northbound.
The internet here is playing up today and has been for most of the weekend.
The car park is full and we learned yesterday that there was a festival upriver and also a couple of local fêtes.
Also, there are a lot of children on site and in order to keep them occupied, we believe parents have turned on their TVs, ipods, ipads, playstations etc which is putting a drain on the signal. We gave up last night and watched a DVD instead of playing scrabble, dominoes, or cribbage.

It’s funny sometimes as we sit and work on our laptops. Our connection is on yo-yo elastic, and we can practically tell the time by the ‘dips’ as they coincide with the soaps and reality programmes in the evenings.
Years ago when you went on holiday, especially camping or caravanning, TVs were off the menu but that was part of the appeal, to get away from it all. News was obtained via the radio or a newspaper, and kids were encouraged to explore or play outside.
I remember one year buying some small poster paint pots with the full intention of sitting down with paper and painting the scenery.
I soon discovered I was crappy at that:  I see so much, yet I am unable to transpose it to paper without the aid of a camera, and even that isn’t on paper now thanks to the digital age.

These days, I paint pictures with words. In some of my posts, I try to take the reader on the journey, to put them where I am, to see the things I do. I hope I succeed sometimes. 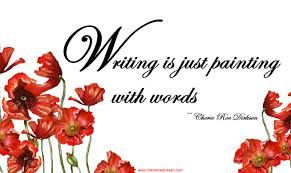 I am a retired number cruncher with a vivid imagination and wacky sense of humour which extends to short stories and poetry. I love to cook and am a bit of a dog whisperer as I get on better with them than people sometimes! We have recently lost our beloved dog Maggie who adopted us as a 7 week old pup in March 2005. We decided to have a photo put on canvas as we had for her predecessor Barney, and now have three pictures of our fur babies on the wall as we found a snapshot of my GSD so had hers done too. From 2014 to 2017 'Home' was a 41 foot narrow boat where we made strong friendships both on and off the water. We were close to nature enjoying swan and duck families for neighbours, and it was a fascinating chapter in our lives. We now reside in a small bungalow on the Lincolnshire coast where we have forged new friendships and interests.
View all posts by pensitivity101 →
This entry was posted in diary, Dogs, Just a thought, lifestyle, Memories, My life, Uncategorized and tagged change, Holidays, internet, rainy days. Bookmark the permalink.