There have been very few dogs I’ve come across in my life that don’t ‘like me’, and most are up for a fuss and a cuddle regardless of size, age or breed.
I’m putty in their hands, and they know it.
I can’t even blame it on having a pocket full of biscuits as I don’t actually carry any now.

Years ago, a guy came into the place where I worked with a rottweiler he was training.
‘Don’t go anywhere near ‘im,’ he warned. ‘ E’ll ‘ave yer ‘and off.’
So I didn’t………….. much.
It was a bit difficult trying to get out of the office into the hall to go to the loo with this dog in the way, so I just spoke softly to it as he gazed at me when I moved to get by.
Next thing I knew, he was on my foot, flat on his back with all four feet in the air, so I rubbed his tummy.
The owner was not impressed.
‘Wot ‘ave yer done to me dog?’ he shouted. ‘E’s supposed to be guard dog, not a bleedin’ pussy!’
My bosses were highly amused, the dog was obviously (unferociously) comfortable, and eventually the owner saw the funny side as it was, after all, still only a pup (eight months) . 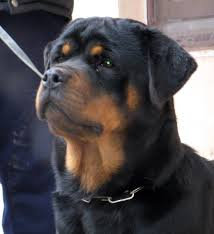 Dogs don’t faze me. They can be barking, all razor teeth and fur coats from behind a gate, and I’m likely to tell them to shut up. I’m not stupid enough to get close to those incisors  though (did that with my own dog in the 80s to separate her in a canine punch up and ended up having a tetanus shot), and I also won’t normally approach a dog if it’s unattended.
Saying that though, MOH and his dog were visiting us before we moved to Lincolnshire and whilst we were out walking, a huge german shepherd came bounding up to me.
I recognised it but couldn’t put a name to it, and it obviously knew me as it flopped on its back and adopted the ‘rub-my-tummy’ position. There was no sign of her owner, and rather than just leave her in the field backing on to a main road, I put her on Maggie’s lead and took her home with us with no resistance.
There was a surname and phone number on her collar disc, so I looked it up in the telephone directory (those were the days!) and discovered the number matched an address just 2 roads away. Getting no reply to my phone call, I decided to walk her back and hopefully meet up with her owner.
I was just turning the corner when a car screeched to a halt in front of me and a woman jumped out.
‘You’ve got my dog! Thank god! Is she alright? Where did you find her?’
I explained what had happened, and she told me that Sasha (the dog) had decided to take herself for a walk as she (the owner) had fallen asleep in the back garden. She was grateful I’d taken care of her, and as we parted company I told her that she would be glad to know Sasha had performed both businesses, which I’d cleared up, and everything was normal!

A new boater to our side of the marina has two dogs. He backs his car up in the car park, then leaves the back hatch open so that they have plenty of air and can see him as he’s working on his boat. They make no effort to jump out, one lies on the back seat and snoozes the day away, but the other is keeping vigil and will bark at anyone with a dog passing on our pontoon below.
The owner tells the dog to be quiet and is ignored, every time. 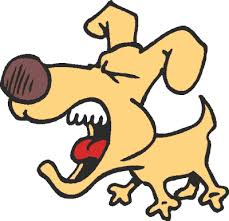 It barked at Maggie and I one day, so I stopped dead, turned so that I was looking directly at it, and told it to ‘Shush!’. Sudden silence with a quizzical look.
It barked the next time it saw us, so again, I paused to face it and told it to ‘Shush!’
It stopped.
I was chatting to the owner yesterday and together (with Maggie) we were walking on the pontoon to our prospective boats when his dog started barking. He told it to be quiet, but it continued barking, so I stopped, looked at it and said ‘Shush!’ It immediately shut up.
‘How did you do that?’ he asked.
I told him I had no idea, but it appeared to work every time, and he seemed quite stunned.
I added that perhaps my ‘Shush’ in a Dorset accent sounded more like a bark, and the dog was intimidated by little ol’ me!
Here’s a thought though: 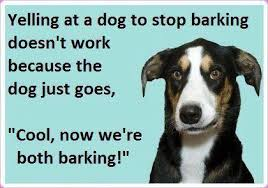 I am a retired number cruncher with a vivid imagination and wacky sense of humour which extends to short stories and poetry. I love to cook and am a bit of a dog whisperer as I get on better with them than people sometimes! We have recently lost our beloved dog Maggie who adopted us as a 7 week old pup in March 2005. We decided to have a photo put on canvas as we had for her predecessor Barney, and now have three pictures of our fur babies on the wall as we found a snapshot of my GSD so had hers done too. From 2014 to 2017 'Home' was a 41 foot narrow boat where we made strong friendships both on and off the water. We were close to nature enjoying swan and duck families for neighbours, and it was a fascinating chapter in our lives. We now reside in a small bungalow on the Lincolnshire coast where we have forged new friendships and interests.
View all posts by pensitivity101 →
This entry was posted in animals and pets, Challenge, diary, Dogs, humour, Just a thought, Marina, Memories, observations, Opinions, Uncategorized and tagged attitude, barking dogs, Maggie, me!. Bookmark the permalink.