I heard these cries as I was coming out of the supermarket the other day.
Hubby and Maggie were out of the car, and a young boy was dragging himself away from them, pulling hard on his Grandmother’s arm.
This is an all too familiar scenario today, a child afraid of a dog, but this was bordering on hysteria.

Maggie is docile, a soft touch, and the worse she could do is lick you to death.
However, to a child, or anyone with a fear of canines, she can be seen as a vicious threat, even though she lay subdued on the concrete wondering what on earth she’d done to cause such a ruckus.

The grandparents were apologetic, but we understood.
With the boy safely in the back of their car and Maggie in the back of ours, he wound down the window and asked me what her name was.
I told him and asked him how old he was.
He said he was 6, so I said that Maggie was older than him, as she was 10.
She stuck her head out of the window and licked my hand as I stroked her.
He wanted to know if we’d got her as a baby, so I said she was only 7 weeks old when we brought her home.

I took all this as a positive sign that he could overcome his fear, though know it will take time, especially after his grandmother explained that he had been bitten twice by the same dog, a staffy cross, which belonged to a neighbour.

The staffies I’ve come in contact with have been affectionate and even tempered, but not knowing what this one was crossed with, I can’t really comment.

The first time, the boy had been playing with the neighbour’s little girl and she’d pushed him. In so doing, he fell into the dog’s bed and the dog bit him on the ear drawing blood, thinking perhaps he was going to steal its toys.
The second time, he had knocked on the door to play and as the neighbour opened it, the dog flew out, and bit him on the back of the leg when he tried to run away.
According to the grandparents, the neighbour did nothing to try and control the animal,  neither did they offer so much as an apology. The boy’s parents didn’t make a complaint either as they were friends.

Dogs and kids. A parent’s nightmare.

I like to think we are responsible owners, and would never leave Maggie alone with a child, no matter how much we trust her.
We have come across many parents with toddlers who have asked if their child can stroke her or say hello. Some have been a little nervous, most all grasping fingers, but we have always had her under control, encouraging the child not to make any sudden movements and to be gentle and so far, have had no incidents.
Maggie’s good with children, the elderly and the disabled, including those in wheelchairs, as we introduced her to all of these groups of people when she was a tiny pup.
We respect the need for space though, and will not force an issue.
All dogs are not vicious, but then again, not all dogs are like Maggie. 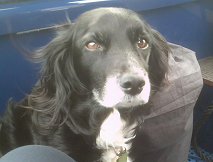 I am a retired number cruncher with a vivid imagination and wacky sense of humour which extends to short stories and poetry. I love to cook and am a bit of a dog whisperer as I get on better with them than people sometimes! In November 2020, we lost our beloved Maggie who adopted us as a 7 week old pup in March 2005. We decided to have a photo put on canvas as we had for her predecessor Barney. We now have three pictures of our fur babies on the wall as we found a snapshot of Kizzy, my GSD when Hubby and I first met so had hers done too. On February 24th 2022 we were blessed to find Maya, a 13 week old GSD pup who has made her own place in our hearts. You can follow our training methods, photos and her growth in my blog posts. From 2014 to 2017 'Home' was a 41 foot narrow boat where we made strong friendships both on and off the water. We were close to nature enjoying swan and duck families for neighbours, and it was a fascinating chapter in our lives. We now reside in a small bungalow on the Lincolnshire coast where we have forged new friendships and interests.
View all posts by pensitivity101 →
This entry was posted in Dogs, fears and phobias, Just a thought, Opinions and tagged attitude, bites, control, dogs, kids, Maggie, training. Bookmark the permalink.