One thing we discovered early on during the trip was that my journal would not have in- depth entries. At best, I managed to jot down the time we arrived at/left the lock, though not both, as I was busy getting off/on the boat safely, fishing for ropes with the boat hook, wielding the lock key, battling gates and opening/closing paddles and if I was lucky taking the occasional photo in between!

This was the dawn of Day 3, Thursday, and according to the radio it was going to be cooler (please!!) with a few showers.
We set off early, 7.30, and arrived at the next lock five minutes later.
Our book said it was only a short distance, but we didn’t realise they meant miniscule!
It took us nearly an hour as the gates were against us, and it was one of the deeper locks, plus one paddle was broken (not by me!) and the gates were stiff as we were the first through for the day.
Almost an hour after that, we were in and through the second and heading towards Bidford.
The properties on the river were fabulous. 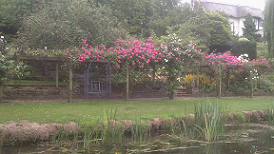 We had heard that the bridge was being repaired, though a farmer had brought the working schedule forward considerably having rearranged the brickwork with his tractor a couple of weeks ago.
This meant that there were cranes and machinery on floats in the water as the maintenance was being carried out, and the river was a MESS!
There was plenty of signage pointing us in the right direction to go through the arch, but there were serious reed masses in the water and despite Hubby’s best manoeuvres, we ended up with a fouled prop and had to pull over to sort it out.
Obviously a narrow boat in trouble is not as straightforward to check out as a car, and we asked for assistance from a hire boat on the bank with the request to allow us to tie up alongside so that Hubby could lift the weed hatch and clear the blockage.
‘Sorry, we’re just on our way out. Try the guy in front.’
The problem was there was no-one aboard in front, so we took a chance, tied up at the back and I held on to the bow to keep her steady.

Hubby sorted out the problem and we were soon under way again, only for something else to entangle itself and we were suddenly dead in the water, with nowhere to moor up and no steering.
I took the helm whilst Hubby worked to clear the prop again.
‘There’s a boat coming Honey’ was greeted with silence.
‘There’s a boat coming’  was also unheard.
‘THERE’S A BOAT COMING!’ I yelled, so it was on the horn to make them aware we were in trouble.

As it turned out it was one of the river pilot boats and he was very helpful in trying to tow us in, calling it in for one of the Big Guns to come and rescue us while I was hanging on to his boat from our bow.
Hubby shouted ‘PROP CLEAR’ from the back, the rescue craft was cancelled, and we were able to continue.

At the next lock, we warned the boaters coming downriver of the hazards and we were through without further incident.
This was the same with the next. 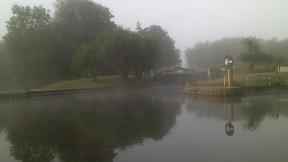 It was such a beautiful spot, we decided to moor there for the night rather than continue on to Stratford. We were both shattered, we could afford an extra stopover and it was so peaceful.
Within minutes of tying up, we had visitors. 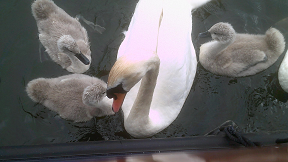 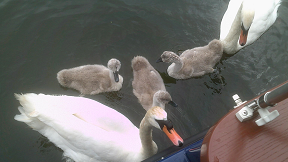 In the evening, I actually got to read the book that had been loaned to us by some friends on the marina. The illustrations were hilarious.

Hubby reckoned the rope tying one had my name written all over it.
I’ll have you know this is a knot I tied and the boat didn’t move anywhere!

I am a retired number cruncher with a vivid imagination and wacky sense of humour which extends to short stories and poetry. I love to cook and am a bit of a dog whisperer as I get on better with them than people sometimes! In November 2020, we lost our beloved Maggie who adopted us as a 7 week old pup in March 2005. We decided to have a photo put on canvas as we had for her predecessor Barney. We now have three pictures of our fur babies on the wall as we found a snapshot of Kizzy, my GSD when Hubby and I first met so had hers done too. On February 24th 2022 we were blessed to find Maya, a 13 week old GSD pup who has made her own place in our hearts. You can follow our training methods, photos and her growth in my blog posts. From 2014 to 2017 'Home' was a 41 foot narrow boat where we made strong friendships both on and off the water. We were close to nature enjoying swan and duck families for neighbours, and it was a fascinating chapter in our lives. We now reside in a small bungalow on the Lincolnshire coast where we have forged new friendships and interests.
View all posts by pensitivity101 →
This entry was posted in diary, film/tv/book, humour, My life, Voyages and tagged hazards, journey, locks, river. Bookmark the permalink.