We went up to the Abbey today to light candles for our Dads.
There was a service on, and although visitors are welcome to join in (even half way through) we declined as we had Maggie and she tends to be a bit vocal to some pitches of organ music. The vicar said it was her contribution to the singing, but we knew it was probably boredom and her not being the centre of attention, so we went for a walk and came back.

These pictures were taken from the grounds at the back and they are flanked by the Gardens of Remembrance. Although this is a large expanse of green, the flowerbed borders are pretty and well kept.
Also along one wall is a mass of huge white lilies. 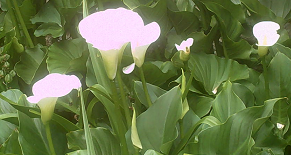 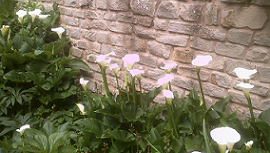 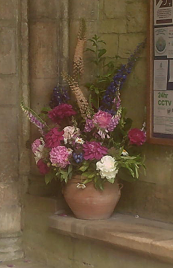 Going in today there was a large floral tribute standing by the main doorway. Apparently the blooms were gathered from the grounds, and are spectacular.
There were also several arrangements inside, each donated by families to mark birthdays, anniversaries, or Fathers Day remembrance for their loved ones.

We had no flowers, but we found our way to ‘our chapel’, lit our candles and sat down to reminisce, Maggie curled up at our feet.

As the flames burned side by side, we noticed how one leaned towards the other, which in turn leaned back as if in response.
As always, we envisaged the Dads sitting together having a chat.
My flame was burning quite brightly, dancing almost, and I reckon Dad was getting quite animated in whatever it was he was talking about. Hubby’s flame flickered, and we thought his Dad was having a laugh at whatever mine had said.
Several times the two leaned towards each other as if in some private discussion (probably about us and wondering what hair-brained scheme we’re going to come up with next).
The flame of the candle directly in front of them was frantically pulsing up and down in brightness as if wanting to get in on the conversation, but our two continued to flicker gently in their own little world, with no invitation to outsiders.

Thoughts of our Dads in a place where time didn’t matter, where they were free from pain and worry in a peaceful setting were prominent in our minds as we sat there in the quiet serenity of the chapel.

No matter where we are, we will always find a church and light a candle for them.
It is nothing to do with religion, faith or spiritual guidance. It is our way of remembering our Dads who are no longer with us, letting them know where we are, and that we are thinking of them always, not just today.

I am a retired number cruncher with a vivid imagination and wacky sense of humour which extends to short stories and poetry. I love to cook and am a bit of a dog whisperer as I get on better with them than people sometimes! We have recently lost our beloved dog Maggie who adopted us as a 7 week old pup in March 2005. We decided to have a photo put on canvas as we had for her predecessor Barney, and now have three pictures of our fur babies on the wall as we found a snapshot of my GSD so had hers done too. From 2014 to 2017 'Home' was a 41 foot narrow boat where we made strong friendships both on and off the water. We were close to nature enjoying swan and duck families for neighbours, and it was a fascinating chapter in our lives. We now reside in a small bungalow on the Lincolnshire coast where we have forged new friendships and interests.
View all posts by pensitivity101 →
This entry was posted in Family, Just a thought, Memories, My life, Remembrance, Uncategorized and tagged Abbey, candles, Dads, Fathers Day. Bookmark the permalink.