I hope there is not bad news on the horizon as this is the second dream I’ve had this week about possessions of the deceased and memories attached.

I woke up crying actually.
In my dream, I was working in the office (1989-2001) and my colleagues had forgotten my birthday.
Not that I was really bothered, except a friend (she had been one of witnesses when we got married) put a pretty box with a quotation on it in my hand.
It said something about little things being important and not to make a big deal out of things that didn’t really matter.
Is there such a quote? I have no idea, but if there isn’t, there should be, so I’ve made my own using an image from google and inserting my narrative. 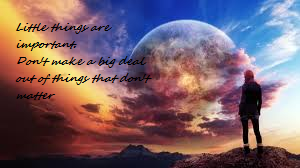 Anyway, inside the box was a lot of what one would call ‘tat’ I suppose.
Odd little items such as cheap jewelry, a small compact mirror, some buttons, a blue ribbon, a pair of tiny glass baubles (not marbles, these were cut glass but not true crystal), and a variety of other small personal items that had apparently belonged to an elderly lady who had recently died.
In my dream, this was no relation to me or the person who had given me this unusual gift.

As I touched each item, I was flashed back to the memory of when it was first acquired.
The jewelry was a token of true undying love but the purchase of gold or silver was beyond the pocket of the giver.
The compact mirror was a graduation/qualification gift from an elderly relative (again, not mine or anyone I knew).
The baubles were trimmings from a tiny tree one lonely Christmas, and the buttons from a shirt that had been sewn and stitched so many times, they were all that were left of the original garment.

But it was the ribbon that brought the tears.
A piece of narrow pale blue ribbon that had held the love letters from the owner’s Intended, her Beau, her Love, the one who never returned from the war.

It was all so real, and as I said, I woke up crying.
I can’t remember seeing any letters in that box or in my dream.
Yet I had felt the sweet and tender memories of a stranger, someone for whom these small and precious keepsakes meant the world, for no other reason or place than in my dreams. 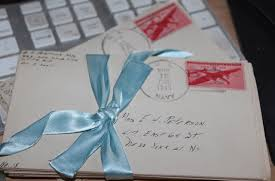 I am a retired number cruncher with a vivid imagination and wacky sense of humour which extends to short stories and poetry. I love to cook and am a bit of a dog whisperer as I get on better with them than people sometimes! In November 2020, we lost our beloved Maggie who adopted us as a 7 week old pup in March 2005. We decided to have a photo put on canvas as we had for her predecessor Barney. We now have three pictures of our fur babies on the wall as we found a snapshot of Kizzy, my GSD when Hubby and I first met so had hers done too. On February 24th 2022 we were blessed to find Maya, a 13 week old GSD pup who has made her own place in our hearts. You can follow our training methods, photos and her growth in my blog posts. From 2014 to 2017 'Home' was a 41 foot narrow boat where we made strong friendships both on and off the water. We were close to nature enjoying swan and duck families for neighbours, and it was a fascinating chapter in our lives. We now reside in a small bungalow on the Lincolnshire coast where we have forged new friendships and interests.
View all posts by pensitivity101 →
This entry was posted in diary, fiction, Just a thought, Memories, Remembrance, Sense, Uncategorized and tagged dream, memories, odd and strange, sub conscious, thoughts, unrelated. Bookmark the permalink.
Loading Comments...
%d bloggers like this: