Years ago, the Ex and I went to see HMS Victory in Portsmouth. 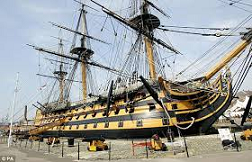 I was none too steady on my feet even though she was in dry dock (!) and I can remember two distinct things about the day :-
1: The red floor on the lower deck to disguise the vast amounts of blood during ‘surgeries’ and
2: Nearly crashing the car on the way home.

The latter was due to the front axle of the vehicle in front of us on the motorway completely collapsing as they were overtaking another car, and we swerved into the outside lane to avoid them. Luckily nothing was attempting to overtake us and no-one was hurt.

Fast forward many years, and Hubby and I went down to Poole Quay to see the Tall Ships.
Poole is my home town, so we didn’t exactly have far to go. Today, it’s a beautiful place to visit but an expensive one to live.
When I mention I’m from Poole, most people think of Sandbanks (Millionaires Row as it was known) and so thought we had oodles of money. Dream on. They may have pricey properties, but the roads are still crap and full of unrepaired pot holes. 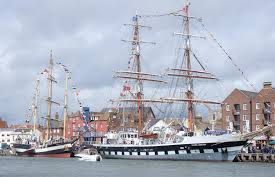 It has the largest natural harbour in Europe (and technically the largest in the world now since Sydney Australia added a man-made bit).
The Quay has bars, fish and chip/burger stands, cockles and whelks (yuk), and a whole load of other goodies for the tourist trade. The old town was kept separate from the new, and thus kept its charm with cobbled streets and curio shops.
There are ferry trips to Brownsea Island, the largest of the five main islands in the harbour, where they have open air Shakespearean plays in the summer, and is home for red squirrels and a host of gnats and other bitey things so don’t forget your ton of insect repellent if you intend to visit. You can also have boat rides round the harbour.
Corfe Castle, Wareham, Swanage and Studland are all easily accessible, and of course there are regular ferry services to the Channel Islands and Cherbourg. 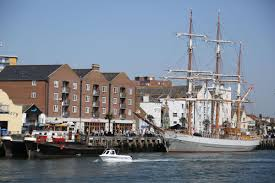 When Hubby and I went to see the Tall Ships all those years ago, we were able to amble along The Quay taking in the wondrous sight of these massive vessels free of charge.
(All photos above are from google)

The ships were at Poole earlier this month, but have been in Gloucester for this Bank Holiday. We went today, and there was an admission fee to the docks of £2. However, if you wanted to go onto the ships, it would set you back £6.
Our neighbours from across the way have been berthed at Gloucester for the week and we stopped to chat to them as they were preparing to continue their journey elsewhere.
They told us that for said £6, this covered admission to the festival, access to the ships, and also free admittance to the museums and exhibitions for the three days of the festival.
In my book, that is good value for money, especially if you were there for the full duration.

We had a relatively cheap day though as we’d parked in the supermarket (free) and walked down to the riverside with the dog (new and different smells to treat her nose), then as we crossed the bridge (free) we took a couple of pictures.

We then went into a coffee shop for two lattes which we had outside (shared with the dog, who loved it as it was extra frothy) before returning to the car to come home, stopping for fishcake and chips on the way.
Total cost less than £8, plus fuel, for a day out.
Not bad, not bad at all.

I am a retired number cruncher with a vivid imagination and wacky sense of humour which extends to short stories and poetry. I love to cook and am a bit of a dog whisperer as I get on better with them than people sometimes! In November 2020, we lost our beloved Maggie who adopted us as a 7 week old pup in March 2005. We decided to have a photo put on canvas as we had for her predecessor Barney. We now have three pictures of our fur babies on the wall as we found a snapshot of Kizzy, my GSD when Hubby and I first met so had hers done too. On February 24th 2022 we were blessed to find Maya, a 13 week old GSD pup who has made her own place in our hearts. You can follow our training methods, photos and her growth in my blog posts. From 2014 to 2017 'Home' was a 41 foot narrow boat where we made strong friendships both on and off the water. We were close to nature enjoying swan and duck families for neighbours, and it was a fascinating chapter in our lives. We now reside in a small bungalow on the Lincolnshire coast where we have forged new friendships and interests.
View all posts by pensitivity101 →
This entry was posted in Memories, My life, Opinions, Uncategorized and tagged day out, history, home town, Poole Quay, Tall Ships. Bookmark the permalink.