No matter how careful (or clever) we are in putting her off, Maggie knows the time. 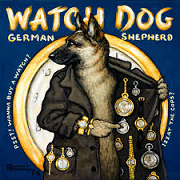 Perhaps I should rephrase that.
She tells us it’s time for a walk. Yeah, that’s more to the point.

Dogs are creatures of habit, like most of us I suppose, but we don’t do things to a set time.
Our days are pretty vague, we have basics that get done, but our time is our own, that’s when Maggie lets us have some.
I was told once that when dogs wake up from a nap, to them it’s a new day.
Bearing that in mind, we have never carried over any displeasure from one sleep to the next. My theory is that if we’re cross with her when she wakes up, she won’t understand why. The same goes for punishing a puppy for toileting in the house whilst you’re out. They don’t know what they’ve done wrong unless you catch them in the act and deal with it immediately.
Anyway, I digress a little……. 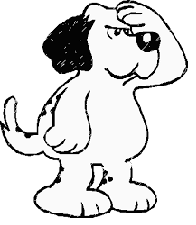 We don’t use key words like ‘walkies’ or ‘tats’ as in the past so called friends used to get a kick out of winding the dog up and then doing nothing about it.
Maggie is vocal though, and tends to whine/squeak when she thinks it’s time for us to give her our undivided attention, get our shoes on, and take her out.
I cannot say this is at 9am, 12 noon, 4pm, 6pm or even 9.30pm for final wees, it’s just ‘there’, some unconscious signal by us that she picks up on, or her inner clock.

Our tells (to her):
Hubby reaching for his support stockings.
Turning off our laptops.
Standing up.
Moving my left knee (she may have had her head on it at the time).
Walking to somewhere else on the boat (loo, kitchen).
Saying anything!

Her tells:
Squeak.
Whine.
Nudge.
Pacing to the back of the boat and back.
Bringing us ‘Baby’.
Moan, mutter, bark (the latter is recent and avoided at all costs!!)

This morning, Hubby took her out for her first wee at 7.30.
The next would be due around 9.30, whether we want to go or not.
Two hours (no dog nap/sleep, just breakfast).
Every day. Without fail.
Two hours after that first walk, whatever time that had been.

We will oblige with a walk into town, down by the lock, or further afield if Hubby is up to it. It’s good exercise for us and if it’s sunny she will get at least two such walks. If it’s raining, she’s taken out somewhere, even if it’s just shopping in the car and we encourage her to do the deed up on the dog walk.

We come back and have lunch (if we haven’t sat on the bench and people watched, sharing our coffee and anything else with her ladyship), then do the usual things.
Around 2.30 we get our vocal reminder, so one of us will take her up to the dog walk for the afternoon performance.
We’re usually OK then until about 6, when we try to beat her to it for the penultimate wee of the day, but she’s ready for us (those damn tells again!). 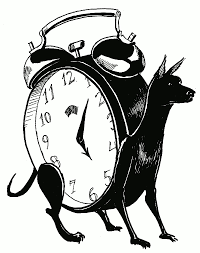 I am a retired number cruncher with a vivid imagination and wacky sense of humour which extends to short stories and poetry. I love to cook and am a bit of a dog whisperer as I get on better with them than people sometimes! We have recently lost our beloved dog Maggie who adopted us as a 7 week old pup in March 2005. We decided to have a photo put on canvas as we had for her predecessor Barney, and now have three pictures of our fur babies on the wall as we found a snapshot of my GSD so had hers done too. From 2014 to 2017 'Home' was a 41 foot narrow boat where we made strong friendships both on and off the water. We were close to nature enjoying swan and duck families for neighbours, and it was a fascinating chapter in our lives. We now reside in a small bungalow on the Lincolnshire coast where we have forged new friendships and interests.
View all posts by pensitivity101 →
This entry was posted in Dogs, humour, observations, Sense and tagged Maggie, mannerism, signals, time, walks. Bookmark the permalink.