We’ve been away 6 days, and Hubby has fixed my laptop for me by purchasing a new plug-in jack (really expensive at £1.99!) to connect to my reserve transformer.
I am now up and running, fully recharged.

It would appear a lot has happened in the time we were away though.
For a start, we have new neighbours BOTH SIDES as Mrs Boating Two has taken her babies to the water so the Bucket Boat has been put up for sale in the other basin, and their new boat moved into their original slot.

The bow of the cruiser new to our starboard side comes level with our kitchen window. This we are really pleased about as it means our signal from the iffy WIFI will not be interrupted or blocked by the vessel’s bodywork!
As it’s a bank holiday weekend again (in the UK we have two in May), we may well meet the owners tomorrow.

The narrowboat now on our port side is also unoccupied, though we know a little bit about the history of this one.
It was originally in the other basin, and belonged to a gentleman who sadly died at the beginning of the year. I’d met his partner just before Christmas who told me he was so very ill, and although I was a bit soggy having just got out of the shower and was drying my hair, I gave her a hug because I felt she needed one. She sobbed on my shoulder and I held her until she felt ready to let me go.

A month or so later I came across a woman sitting in one of the loo cubicles in the shower block and asked if she was OK.
She was surrounded by clothes, though she was fully dressed, and it turned out to be his daughter. She had been crying, so I stayed with her for a while and let her talk.
I expressed my sorrow at her loss and she said that her Dad had been ‘ready to go’ after such a long battle, but it didn’t make things any easier. She gave me a lovely hug as we parted company, which I returned.
I heard later that she intended to keep her Dad’s boat and live on it herself.
Maybe we will see something of her over the weekend too.

However, the TV aerial on it has been commandeered by a pair of swallows. 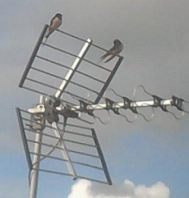 The first two pictures were taken through our port window but the last one was through the clear plastic of our bow cover just after it started to rain.
This is a later shot with the zoom (never very good I’m afraid) 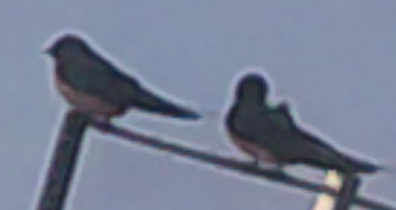 The marina is awash with swallows again as they dip and dive across the water surface taking a drink. They are so quick, there is no way my cheap little camera is going to get a decent photograph, but if they come and sit on the aerial often enough, maybe I just might happen to be sitting in the bow with the camera and can get a clearer shot with no glass in the way!

I am a retired number cruncher with a vivid imagination and wacky sense of humour which extends to short stories and poetry. I love to cook and am a bit of a dog whisperer as I get on better with them than people sometimes! We have recently lost our beloved dog Maggie who adopted us as a 7 week old pup in March 2005. We decided to have a photo put on canvas as we had for her predecessor Barney, and now have three pictures of our fur babies on the wall as we found a snapshot of my GSD so had hers done too. From 2014 to 2017 'Home' was a 41 foot narrow boat where we made strong friendships both on and off the water. We were close to nature enjoying swan and duck families for neighbours, and it was a fascinating chapter in our lives. We now reside in a small bungalow on the Lincolnshire coast where we have forged new friendships and interests.
View all posts by pensitivity101 →
This entry was posted in diary, life afloat, Marina, My life, nature, observations and tagged birds, Bucket Boat, dogs, friend, home, visit. Bookmark the permalink.