It seems weird having access to a full size kitchen and cooker, not to mention loads of goodies in the cupboards with which to cook.
With our friend in hospital, we did a little stocktake and went shopping.
Yesterday I made a cauliflower cheese with stripped ham.
It was totally delicious, but our friend was kept in overnight so his portion was put in a dish and has been frozen down for a later date.

Today it was a budget spaghetti bolognese.
To serve 3, my ingredients were:

Cooking the pasta is a doddle, and takes only 5-10 minutes as per the packet so that was left until I was almost ready to serve.

For my sauce, I chopped the carrot and got it cooking in a little water to soften it up first.
I added the minced beef and when it was almost cooked, drained off the fatty liquid, then added the chopped onion, stock cubes, chopped garlic and tin of tomatoes.
I also added about 20g of grated cheese to the mix and stirred well, bringing it all to the boil, then put a lid on the pan and turned it down to low for about five minutes before switching the heat off completely.

I have discovered that my mix is always better on a second heating which is why I will normally make this do Hubby and I two meals (the other being a chilli by adding a tin of drained red kidney beans and chilli powder, or lasagne making up a cheese sauce for layering between the pasta sheets).
Our friend has a good appetite, so these quantities were ideal for the three of us.

When Hubby got back after collecting our friend from the hospital early this afternoon, I heated up the sauce and cooked the spaghetti.
Once served, I sprinkled the remainder of the grated cheese on top. 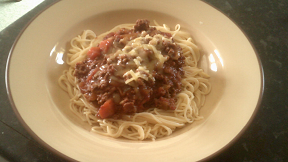 Note:
Our friend didn’t have any italian herbs in his cupboard so these were absent. At home, I would add about a teaspoon (again only a few pence).

The men were hungry but I didn’t have a dessert, so I made my old faithful standby, stodge in the microwave.
This is quick, easy and fat free.

Ingredients today (total cost around 70p) :
4 heaped tablespoons of SR flour.
4 dessert spoons of soft brown sugar
2 eggs
milk to make batterlike consistency (not too thin and runny, but not too thick either, I’d say the next step beyond pancake batter)
golden syrup.

I mixed the flour, sugar and eggs in a bowl, gradually adding enough milk until it was a smooth batter.
(Our friend doesn’t have a large bowl for the microwave so I had to improvise and made 3 individual ones in the glass serving bowls I found.)
I put one dessert spoon of golden syrup in each dish, then covered it with the mix.
Each was cooked in the microwave for three minutes/ until the sponge started to shrink away from the sides and it was springy to the touch.
I then turned them out into a bowl.

It looks a bit like an anemic rumbaba doesn’t it with that hole in the middle:
well, you could put extra syrup or fresh fruit in it if you wished.

But Hubby likes his custard, so that’s what we had with ours (15p for the instant stuff, I can’t make it for toffee).

I have varied this recipe by adding chocolate powder or sultanas.
Mum used to make steam puddings like spotted dick or treacle sponge which would take hours in a basin wrapped in muslin over a pan of boiling water. This is almost as good (nothing beats Mum’s cooking) in a fraction of the time and energy costs.

Confessional note:
These do NOT keep and should be eaten immediately whilst hot.
(Unless of course you want to build a rock garden, in which case, they make very good bricks after being left for a few hours).

I am a retired number cruncher with a vivid imagination and wacky sense of humour which extends to short stories and poetry. I love to cook and am a bit of a dog whisperer as I get on better with them than people sometimes! In November 2020, we lost our beloved Maggie who adopted us as a 7 week old pup in March 2005. We decided to have a photo put on canvas as we had for her predecessor Barney. We now have three pictures of our fur babies on the wall as we found a snapshot of Kizzy, my GSD when Hubby and I first met so had hers done too. On February 24th 2022 we were blessed to find Maya, a 13 week old GSD pup who has made her own place in our hearts. You can follow our training methods, photos and her growth in my blog posts. From 2014 to 2017 'Home' was a 41 foot narrow boat where we made strong friendships both on and off the water. We were close to nature enjoying swan and duck families for neighbours, and it was a fascinating chapter in our lives. We now reside in a small bungalow on the Lincolnshire coast where we have forged new friendships and interests.
View all posts by pensitivity101 →
This entry was posted in budgets, food, recipes and tagged appetite, budget, food, friend, quantity. Bookmark the permalink.