Signs of Summer and River views.

Several of our new friends have been taking their boats out on the water, some staying out overnight and one for three weeks (they’re due back on Saturday).
Hubby and I are content to putter up river though, enjoying the peace and tranquility of the moment.
Last time we were out, we came across a flock of swans. So far, it is the largest number we have seen in close proximity. 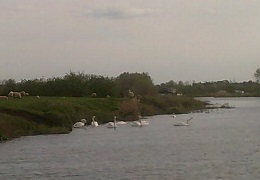 I counted eight, and as I was at the tiller, Hubby took the shots. 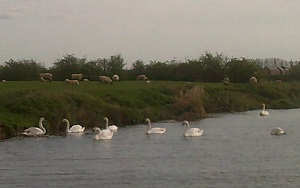 He also took some of the river itself as we chugged along. 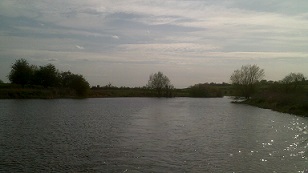 Meanwhile, the swans here in the Marina continue to take it in turns to sit on the nest.

Our friend at the end of our pontoon saw the first ducklings this weekend.
The mother bird hurriedly shielded them from view before he could get a proper head count, but he said there was a significant number.
It would appear that the nests are on the other side of the bank, so we shall have to be patient. It also explains the birds’ absence here, though our Quartet returned last night for their hull supper, and the Three Bachelors have just flown in, so Lonely Duck has made himself scarce.

The heron is back and making his presence known, having landed on our roof with one helluva thump.
I took these pictures last year from the back of the boat shortly after our arrival.

The swallows are also beginning to arrive, so proof that Summer is indeed on its way!

I am a retired number cruncher with a vivid imagination and wacky sense of humour which extends to short stories and poetry. I love to cook and am a bit of a dog whisperer as I get on better with them than people sometimes! We have recently lost our beloved dog Maggie who adopted us as a 7 week old pup in March 2005. We decided to have a photo put on canvas as we had for her predecessor Barney, and now have three pictures of our fur babies on the wall as we found a snapshot of my GSD so had hers done too. From 2014 to 2017 'Home' was a 41 foot narrow boat where we made strong friendships both on and off the water. We were close to nature enjoying swan and duck families for neighbours, and it was a fascinating chapter in our lives. We now reside in a small bungalow on the Lincolnshire coast where we have forged new friendships and interests.
View all posts by pensitivity101 →
This entry was posted in diary, ducks, life afloat, lifestyle, Marina, My life, narrow boat, nature, swans and tagged observations, peace and tranquility, photos, river trip, swallows, swans. Bookmark the permalink.

4 Responses to Signs of Summer and River views.