The M5 was busy yesterday, so much so that when we came back from town, we were glad we weren’t on it, as traffic was at a standstill.
Later, we saw the motorway from another perspective, and although traffic was flowing, well, so were we…………….. underneath!

It was a bit windy out on the water, and so we were zig-zagging a bit holding her steady, but saying that, we had the river to ourselves again.
To be honest, it was such a lovely day and as we needed to run the engine, we thought it would be nice to go out rather than stay in the marina and churn up the mud here.
Coming back in though was tricky, as the wind caught us and Hubby had a bit of a game docking. Unfortunately, we nudged another narrow boat, and the owner came out to give us a hand with the ropes, knowing full well how difficult it can be sometimes.

Our boat is 41 feet long, so turning it and reversing isn’t exactly like driving a car. 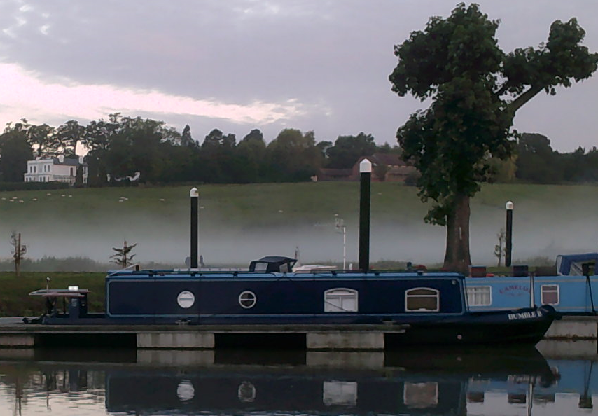 (No, we haven’t got funnels, those are the posts for the pontoons to rise with the water level)

Weighing in at 8 tonnes, she’s no lightweight either, but narrow boats are built to withstand the occasional nudge, not like the fibre glass cruisers which tend to crumple if they get in the way or try to take us on.
He’s refurbishing his, and Hubby was invited to go in and see how they were getting on.
Now if we’d ‘kissed’ somebody’s car, they would have been up in arms shouting abuse and demanding compensation!

I am a retired number cruncher with a vivid imagination and wacky sense of humour which extends to short stories and poetry. I love to cook and am a bit of a dog whisperer as I get on better with them than people sometimes! In November 2020, we lost our beloved Maggie who adopted us as a 7 week old pup in March 2005. We decided to have a photo put on canvas as we had for her predecessor Barney. We now have three pictures of our fur babies on the wall as we found a snapshot of Kizzy, my GSD when Hubby and I first met so had hers done too. On February 24th 2022 we were blessed to find Maya, a 13 week old GSD pup who has made her own place in our hearts. You can follow our training methods, photos and her growth in my blog posts. From 2014 to 2017 'Home' was a 41 foot narrow boat where we made strong friendships both on and off the water. We were close to nature enjoying swan and duck families for neighbours, and it was a fascinating chapter in our lives. We now reside in a small bungalow on the Lincolnshire coast where we have forged new friendships and interests.
View all posts by pensitivity101 →
This entry was posted in life afloat, My life, narrow boat, observations, Uncategorized and tagged motorway, narrowboats, neighbours, river. Bookmark the permalink.