or perhaps I should say Dream Eating.

We’ve all heard Tommy Cooper’s joke about the guy who dreamt he ate a ten pound marshmallow and when he woke up, his pillow was missing.
Well, my dream was a little bit more health conscious, and I woke up this morning fancying strawberries. In fact, my craving was such that I could actually taste them.
No, I’m not pregnant.
However, sometimes I dream about things and during the day, they kind of become reality.

I haven’t had fresh strawberries for years, the last one being one we’d grown ourselves, and I got to it before the blackbird did (he’d been eying it up for a while, and even though we’d netted the tub, he was still trying to get his beak to it!) .
The last ones I bought looked lovely, but tasted…….. of nothing. Frozen ones don’t do it for me, even on cheesecake, and strawberry flavoured stuff…..  well, just isn’t.

Hubby and I have both been feeling a little depressed these past few days.
We’re OK, it’s just that there’s a lot on our minds and we haven’t had a decent night’s sleep for almost a week.
We’ve just had a few days with our friend, and the first night I was totally restless, and the second I had a nightmare. Hubby has been suffering with pain in both legs, and the only one sleeping soundly is her ladyship, provided it’s not windy.

We’ve therefore been reckless today and not only bought chocolate, but treated ourselves to a bacon roll and coffee after seeing the Bank Manager (no problems), a coffee on the bench to people watch after walking the dog, and a pizza for tea after doing the shopping.
On the way to the pizza place, I passed the greengrocer who was selling the biggest, juiciest looking strawberries for £1.50 for two punnets, each containing about a dozen. 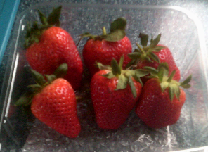 Hubby isn’t really a fan, so as there was no way I could eat both (and stay away from the toilet block), I offered our neighbours the other rather than waste them. They were really pleased and insisted on paying me something (though I didn’t want anything) so I accepted 50p.

These red fruits are casting their unique aroma throughout the boat, and with it, a sense of Summer.
However, I am a tad disappointed. They aren’t quite ripe, as the tops are green so the stalks don’t come out easily, and thus they are a little hard.
Mind you, it took six samplings for me to determine that. 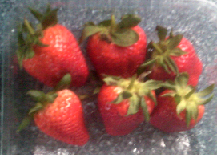 It’s been another glorious day so they should soften up overnight and I’ll have these tomorrow on my breakfast cereal.

I am a retired number cruncher with a vivid imagination and wacky sense of humour which extends to short stories and poetry. I love to cook and am a bit of a dog whisperer as I get on better with them than people sometimes! We have recently lost our beloved dog Maggie who adopted us as a 7 week old pup in March 2005. We decided to have a photo put on canvas as we had for her predecessor Barney, and now have three pictures of our fur babies on the wall as we found a snapshot of my GSD so had hers done too. From 2014 to 2017 'Home' was a 41 foot narrow boat where we made strong friendships both on and off the water. We were close to nature enjoying swan and duck families for neighbours, and it was a fascinating chapter in our lives. We now reside in a small bungalow on the Lincolnshire coast where we have forged new friendships and interests.
View all posts by pensitivity101 →
This entry was posted in food, health, humour, Uncategorized and tagged food, fruit, lack of sleep, restless, strawberries, taste. Bookmark the permalink.

10 Responses to Eating a dream