These are the pictures I took of the swan on the nest this morning.
It’s a magnificent structure. I don’t know if it was the male or female ‘sitting’ (apparently the female has a paler beak) but the other was to my left some distance away, watching my every move.

Source RSPB.
The male and the female birds, the cob and pen, usually attempt to mate for life, although it is not true to say that if one of the birds were to die the other would necessarily pine away. It is possible for an adult bird to find an alternative mate.
The nest is a huge mound of material, normally dried grasses and assorted vegetation, sticks and rushes, constructed at the water’s edge. The nest is built by the female, while the male supplies the materials.
The female lays up to seven eggs between late April and early May. Both sexes incubate the eggs, which hatch after 35-41 days.
Young birds will not generally breed for the first two years of adult life.

I’ve seen a flock of swans in the field running parallel to the dog walk, and a lone swan comes alongside our boat quite often.

On the river last week, I took several photos of them, either in groups or singly.
I think they are majestic and graceful. 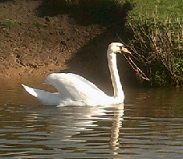 I am a retired number cruncher with a vivid imagination and wacky sense of humour which extends to short stories and poetry. I love to cook and am a bit of a dog whisperer as I get on better with them than people sometimes! We have recently lost our beloved dog Maggie who adopted us as a 7 week old pup in March 2005. We decided to have a photo put on canvas as we had for her predecessor Barney, and now have three pictures of our fur babies on the wall as we found a snapshot of my GSD so had hers done too. From 2014 to 2017 'Home' was a 41 foot narrow boat where we made strong friendships both on and off the water. We were close to nature enjoying swan and duck families for neighbours, and it was a fascinating chapter in our lives. We now reside in a small bungalow on the Lincolnshire coast where we have forged new friendships and interests.
View all posts by pensitivity101 →
This entry was posted in diary, Marina, nature, observations and tagged hatching, magnificent structure, nest, RSPB, swans. Bookmark the permalink.

6 Responses to Counting the days