Today, Hubby and I walked along the river bank as it’s been such a glorious day.
Maggie ‘asked permission’ (looked at us, looked at target, looked back at us) to chase a crow on the flood plain, and with approval she was off like a shot, surface water splashing up behind her as she ran, in her element even if it was just a short burst.
She barked at it when it flew off, but was grinning happily on her return as we approached the bridge over the weir.

It’s over a mile to walk, so we went into the Abbey tea room for a coffee and treated ourselves to some homemade florentine biscuits. They were decidedly yummy.

Maggie was also given a couple of free dog biscuits, so she was quite happy.

Provided you keep them on a lead, dogs are allowed into the Abbey itself (services permitting of course), so we went in to light candles for our Dads.
It’s beautiful, a mixture of architectures with nooks and crannies, vaults and prayer rooms.
There is a notice saying that it costs around £5 a minute for the Abbey’s upkeep and could visitors each spare ‘a minute’. Unfortunately, £10 a visit is beyond us, but we do what we can and always donate something.
Sadly my pictures of the stained glass windows didn’t come out very well, but this one did,  looking down the aisle from the other direction. 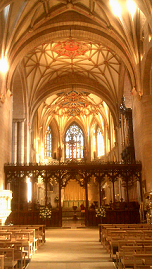 We have chosen a little chapel area tucked into a corner as ‘our special place’ for our Dads candles.  The blue from the stained glass window was reflected on the wall as the sun shone through it.

Today there were no candles at all on the metal arch, so I lit one from another section and carried it back to light the ‘master candle’ in its glass holder, thinking my Dad would have liked the thought of sharing an Eternal Flame with others.

We placed our candles side by side at the top of the arch and sat down in the peace and serenity of the Abbey. Even Maggie settled down and didn’t pester.
A slight breeze caught one of the flames, blowing it gently towards the other and Hubby said the two Old Boys were talking or conferring over something.
I could imagine that, smiled and closed my eyes.

Wherever you are, wherever we are, know you are both with us.

Note:
All pictures except florentines are mine.

I am a retired number cruncher with a vivid imagination and wacky sense of humour which extends to short stories and poetry. I love to cook and am a bit of a dog whisperer as I get on better with them than people sometimes! We have recently lost our beloved dog Maggie who adopted us as a 7 week old pup in March 2005. We decided to have a photo put on canvas as we had for her predecessor Barney, and now have three pictures of our fur babies on the wall as we found a snapshot of my GSD so had hers done too. From 2014 to 2017 'Home' was a 41 foot narrow boat where we made strong friendships both on and off the water. We were close to nature enjoying swan and duck families for neighbours, and it was a fascinating chapter in our lives. We now reside in a small bungalow on the Lincolnshire coast where we have forged new friendships and interests.
View all posts by pensitivity101 →
This entry was posted in Family, Memories, nature, observations, Remembrance and tagged Abbey, candles, Dads, memories, river, stained glass windows, the Abbey, walk, weir. Bookmark the permalink.
Loading Comments...
Comment
×
%d bloggers like this: