Wish I could say this was my photo as this is how the Malvern Hills (UK) looked this morning.

Last night when we left our friend, it was snowing.
Big fat flakes were pitching and we anticipated a two hour journey ahead of us being aware of a detour we’d have to make following a major accident on our usual route.
As things turned out though, we made it home in 90 minutes, passing out of the snow after 20 of those and by the time we hit the motorway, we were driving in and out of rain.

This is the second long trip the I10 has done in 2 days, and it has performed exceptionally well.  Once we understood what the ‘dinging’ was all about having recognised the little snowflake on the road warning light (ice alert, not engine problems!), Hubby was quite content behind the wheel.
There had been snow here on the marina too. Some of the vehicles had their windscreens covered with it, and we were warned by one of the residents when we arrived back that the gantry could be a little slippery.
The pontoon wasn’t exactly a walk in the park either, but we got aboard OK, put on the kettle and heating (yes, in that order) and sorted ourselves out. 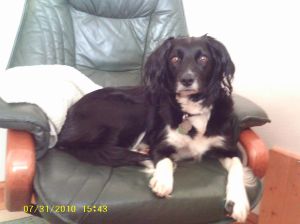 Maggie, bless her, is feeling the cold these days, and when we finally got to bed (just before 2am as we were chatting with our Czech friend and catching up with our blogs, then had to take her up for her final wee) she was shivering.
Hubby got up to get her blanket, and she seized the moment to snuggle higher up the bed into me, though not invading his side.
Duly wrapped like some woolly mummy and with my arm along her flank, she eventually drifted into the land of Doggy Nod but it was a while before the shivering subsided. 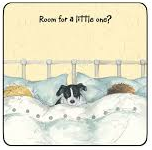 We awoke this morning at 8.30 and looking out of the window, the pontoon was completely white.
We got up and dressed, had breakfast, then donned our spikes over our shoes. As we crunched along, they worked a treat, but as far as we know don’t come in Maggie’s size. She gradually got the idea not to hurry, although she must have been desperate for that first wee of the day. We are putting her winter jacket on whenever we go out anyway to keep her warm.

By midday, the snow had gone, but the water level has risen substantially which is a good thing in some respects as the angle of the gantry won’t be quite so severe.
The forecast is for rain and heavy winds again tonight, though it looks like minus temperatures will hit again by the weekend.
Winter is on its way. 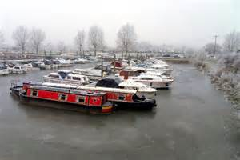 Picture from the internet, taken for BBC News 2010

I am a retired number cruncher with a vivid imagination and wacky sense of humour which extends to short stories and poetry. I love to cook and am a bit of a dog whisperer as I get on better with them than people sometimes! We have recently lost our beloved dog Maggie who adopted us as a 7 week old pup in March 2005. We decided to have a photo put on canvas as we had for her predecessor Barney, and now have three pictures of our fur babies on the wall as we found a snapshot of my GSD so had hers done too. From 2014 to 2017 'Home' was a 41 foot narrow boat where we made strong friendships both on and off the water. We were close to nature enjoying swan and duck families for neighbours, and it was a fascinating chapter in our lives. We now reside in a small bungalow on the Lincolnshire coast where we have forged new friendships and interests.
View all posts by pensitivity101 →
This entry was posted in diary, home, life afloat, Marina, Uncategorized, weather and tagged boat, cold, ice, snow. Bookmark the permalink.

3 Responses to It snowed here!