The Tale of the Woolly Pully

We’ve all had one, that favourite jumper we’ve worn practically 24/7 from the day we were given it, the one however tatty we’re loathe to dispose of, the one that if human, would have been given a State Funeral.

I still have my Dad’s cardigan. It is threadbare, misshapen and baggy in all the wrong places, darned on one sleeve (badly as I couldn’t match the wool but did my best), and lovingly packed away here in the boat even though I am unlikely to wear it again. 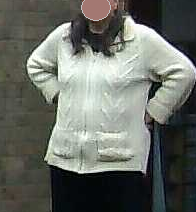 I was given another, also knitted for Dad by my Mum, which I keep ‘for best’, but it’s not the same. Currently I’m wearing a blue hand knitted jersey (also by Mum some 30 odd years ago) which shrinks a little more every time I wash it.
Hubby had a favourite when I met him, but because it also fitted me, it was renamed  ‘our jumper’, and eventually became Maggie’s bed as it was the one we put in the drawer we used the first night we got her.
Since then, he has had a variety of jumpers, and occasionally, just occasionally, one will be given the honorary title of ‘Woolly Pully’. 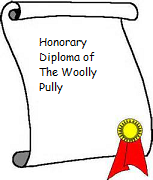 Neither of the ones I knitted for him have met with this accolade, although both were worn almost continually. Sadly the first got binned early last year, and the second is standing in the wings, an understudy for when The Chosen One is in the wash. 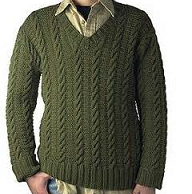 A previous friend offered to knit him one if I bought the wool. Her pattern was similar to above, but a round neck rather than ‘V’.
Not knowing exactly how much to buy, and my only experience being to make sure the dye and batch numbers were all the same on the balls, I purchased a complete pack (4) of 400g balls of arran wool.
At £6 a ball, it was good quality stuff, and the end result would keep him lovely and warm during the winter months.
This became his Woolly Pully. As she’d used less than 2 balls,  she also knitted a plain sleeveless tank top using another, and kept the rest for herself, not that I minded.

Every time it was washed, it stretched a little more, but Hubby didn’t mind. He loved it, and lived in it for years (apart from the Understudies).
Sadly, it eventually had to go, and another friend had purchased a fleecy jumper for her husband but he didn’t like it it, so she gave it to us, so that was his replacement for the past year.

My sister in law sent us a parcel.
Nothing to do with Christmas, and it cost a bomb to post coming from NZ.
Inside was a thick, cabled beige sweater similar to the blue one knitted all those years ago.
I’m not sure if she knitted it herself, but it looks hand knitted and will last for years.
Hubby tried it on.
Apart from going to bed, he hasn’t taken it off.
Yesterday he announced that this was now his Woolly Pully.

I am a retired number cruncher with a vivid imagination and wacky sense of humour which extends to short stories and poetry. I love to cook and am a bit of a dog whisperer as I get on better with them than people sometimes! In November 2020, we lost our beloved Maggie who adopted us as a 7 week old pup in March 2005. We decided to have a photo put on canvas as we had for her predecessor Barney. We now have three pictures of our fur babies on the wall as we found a snapshot of Kizzy, my GSD when Hubby and I first met so had hers done too. On February 24th 2022 we were blessed to find Maya, a 13 week old GSD pup who has made her own place in our hearts. You can follow our training methods, photos and her growth in my blog posts. From 2014 to 2017 'Home' was a 41 foot narrow boat where we made strong friendships both on and off the water. We were close to nature enjoying swan and duck families for neighbours, and it was a fascinating chapter in our lives. We now reside in a small bungalow on the Lincolnshire coast where we have forged new friendships and interests.
View all posts by pensitivity101 →
This entry was posted in humour, Memories, Uncategorized and tagged favourite, jumper, knitting. Bookmark the permalink.

9 Responses to The Tale of the Woolly Pully