I was thinking of a particular song the other day which had been the answer to a question in a radio pop quiz, one of the few I actually got right.

DECK OF CARDS
is the story of a young solider arrested for playing cards in Church, and is probably familiar to all of you, so this is by far a Classic:

This extract is the soldier’s explanation (and defense against the charges) :

“When I look at the Ace,
it reminds me that there is but one God,
and the deuce, reminds me that the bible is divided
into two parts, the old and the new testament.
When I see the trey, I think of the Father, Son, and the Holy Ghost.
And when I see the four,I think of the four Evangelists who preached
the Gospel There was Matthew, Mark, Luke and John.

So, you see Sir, my pack of cards serves me as a Bible,
an Almanac, and a prayerbook”. 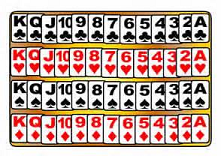 There were several other recordings including Hank Williams and Max Bygraves , the latter being the one that I remember from my childhood.

I am a retired number cruncher with a vivid imagination and wacky sense of humour which extends to short stories and poetry. I love to cook and am a bit of a dog whisperer as I get on better with them than people sometimes! In November 2020, we lost our beloved Maggie who adopted us as a 7 week old pup in March 2005. We decided to have a photo put on canvas as we had for her predecessor Barney. We now have three pictures of our fur babies on the wall as we found a snapshot of Kizzy, my GSD when Hubby and I first met so had hers done too. On February 24th 2022 we were blessed to find Maya, a 13 week old GSD pup who has made her own place in our hearts. You can follow our training methods, photos and her growth in my blog posts. From 2014 to 2017 'Home' was a 41 foot narrow boat where we made strong friendships both on and off the water. We were close to nature enjoying swan and duck families for neighbours, and it was a fascinating chapter in our lives. We now reside in a small bungalow on the Lincolnshire coast where we have forged new friendships and interests.
View all posts by pensitivity101 →
This entry was posted in diary, Just a thought, numbers, Poetry and tagged arrest, cards, church, explanation, soldier, Sunday. Bookmark the permalink.
Loading Comments...
%d bloggers like this: