The Mouse that came in from the cold

I’m going back a few years now, before I met Hubby, and to a previous relationship. 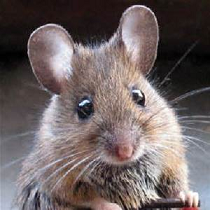 We’d settled down for the night, and I heard scratching.
Partner told me to go to sleep, but the scratching intensified and I told him I thought we had a mouse in the bedroom.
He flicked on the light, had a brief look around once his eyes had adjusted, then told me I was being silly, and switched the light off again.

Five minutes later, the scratching resumed, and to his annoyance, I nudged him and told him there was definitely a mouse in the room.
The light went on again, and he actually got out of bed this time to look.
‘Nothing!’ he said, and getting back into bed, turned out the light.

I was convinced though that we had a mouse and at the sound of scratching, I turned the light on myself and told him to find it.

He was not happy. He was not impressed. He did not find anything.
He was however quite angry by now (at me) and told me to get to sleep.
Lying there next to him, light from the clock radio was sufficient for me to see something moving on the bottom of the bed.
I kicked him and told him the mouse was on the bed, to which he furiously replied that my mind was full of mice, so much so that I had convinced myself there was a mouse when there wasn’t.

I put the light on just in time for the pair of us to see a little mouse jump off the bed and disappear behind the wardrobe.

Our neighbours heard the scream (not mine) as he threw himself out of bed, and armed with a slipper started to whack anything and everything in sight that was in close proximity to the wardrobe.
He eventually got a lucky strike, and poor mousey was no more.

With the bedding wrapped around me, I was in hysterics on the bed.
Not that I was afraid, but just the ridiculousness of the situation.
It wasn’t so much that we’d been playing Morse Code with the light switch for the last half hour, but the fact that he’d been charging round the bedroom stark naked, in all his dangly glory.

I am a retired number cruncher with a vivid imagination and wacky sense of humour which extends to short stories and poetry. I love to cook and am a bit of a dog whisperer as I get on better with them than people sometimes! In November 2020, we lost our beloved Maggie who adopted us as a 7 week old pup in March 2005. We decided to have a photo put on canvas as we had for her predecessor Barney. We now have three pictures of our fur babies on the wall as we found a snapshot of Kizzy, my GSD when Hubby and I first met so had hers done too. On February 24th 2022 we were blessed to find Maya, a 13 week old GSD pup who has made her own place in our hearts. You can follow our training methods, photos and her growth in my blog posts. From 2014 to 2017 'Home' was a 41 foot narrow boat where we made strong friendships both on and off the water. We were close to nature enjoying swan and duck families for neighbours, and it was a fascinating chapter in our lives. We now reside in a small bungalow on the Lincolnshire coast where we have forged new friendships and interests.
View all posts by pensitivity101 →
This entry was posted in fears and phobias, humour, Mice stories, My life and tagged bedroom, mouse. Bookmark the permalink.

25 Responses to The Mouse that came in from the cold