I cannot face the day until I have had my morning cuppa, and for Hubby, he needs at least two.
We are compatible though and as we are usually on an economy drive, things work out very well.
You see, Hubby likes strong tea, I like mine weaker, so we can share a tea bag.
This stems back to staying with a family where only one tea bag was used per pot, regardless of the size.
Hm, cats pee anyone?
But for years afterwards, I could not stomach strong tea.

We always have the kettle on, so whenever anyone visited, first thing asked was always ‘tea or coffee’?
It wasn’t until someone asked me (in my own house) if I’d leave the tea bag in the cup as they preferred strong tea, because quite honestly, I didn’t make it strong enough for them.
Bit of a wake up call that, and one I took to heart, but not with offense.

The strength of tea varies per brand of course, but in most instances, as I’ve said, one tea bag will make a cup for each of us.
Hubby has first dip, and I have the second.

We used to joke that we’d hang the ‘good’ tea bags on the line to dry out and use again, though assured our visitors that they would always have a fresh one. It was amazing how many people actually believed us.
Times may have been hard, but NOTHING prevented us from having a decent cup of rosy lee.

Some years ago though, a work colleague made a big thing about his cuppa.
Our department invested in a large tea pot as there were 11 of us, 7 of us tea drinkers, and tea out of the coffee machine (funny how we always seem to say that) was dire.
Despite whatever ‘number’ his was out of the pot, it was never strong enough, and to be honest, ‘the joke’ wore very thin  (or weak).

I was in a DIY store one afternoon and found the perfect solution.
Even better, it was FREE, and we all know how much I love that word.

Next day, and with a flourish, I presented my colleague with a glossy card.
I told him to pick a colour, and I would ensure his tea would match it perfectly. 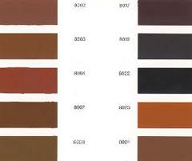 I am a retired number cruncher with a vivid imagination and wacky sense of humour which extends to short stories and poetry. I love to cook and am a bit of a dog whisperer as I get on better with them than people sometimes! In November 2020, we lost our beloved Maggie who adopted us as a 7 week old pup in March 2005. We decided to have a photo put on canvas as we had for her predecessor Barney. We now have three pictures of our fur babies on the wall as we found a snapshot of Kizzy, my GSD when Hubby and I first met so had hers done too. On February 24th 2022 we were blessed to find Maya, a 13 week old GSD pup who has made her own place in our hearts. You can follow our training methods, photos and her growth in my blog posts. From 2014 to 2017 'Home' was a 41 foot narrow boat where we made strong friendships both on and off the water. We were close to nature enjoying swan and duck families for neighbours, and it was a fascinating chapter in our lives. We now reside in a small bungalow on the Lincolnshire coast where we have forged new friendships and interests.
View all posts by pensitivity101 →
This entry was posted in budgets, humour, My life, work and tagged colleague, strength, tea, teabags. Bookmark the permalink.