Although we have (or had, before converting it to a cupboard) a shower on board, it is more practical to use the Marina facilities for a variety of reasons:
It’s warm in the shower block.
It doesn’t reduce our water supply.
Instant hot water.
No need to worry about drainage.
I can wash my hair without banging my arms on the roof.
No worries about steaming up the boat. 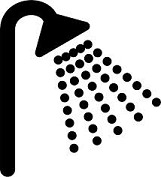 Not quite so practical:
Having to leg it up to the shower block in the first place (means having to get dressed as I can’t exactly waddle up in my slippers and nightie, good weather or bad)
The cubicles are small, though perfectly adequate and definitely bigger than the one on board, but you can’t exactly spread out and drying off is awkward and confined.
The possibility of having to queue (3 showers in both the ladies and the gents, but so far neither of us have had a problem).

We had a shower in the caravan too, but never used it.
In fact, apart from the loo in emergencies or at night, we didn’t use the bathroom at all, preferring to have our wash (with the curtains drawn of course) at the kitchen sink.
We never had such luxury in the tent though, but when we had the larger beast, we could wash from a bowl in the outer section in comfort and privacy.
We would however take full advantage of whatever amenities were available on site.
Keeping clean was a priority, wherever and however we were living at the time.

Having a shower is heavenly (though the option of a long soak in a bath is a lovely thought) especially if you’ve got all hot and sweaty through work, a restless night, or just the summer heat.
Most of us prefer to shower in private, though Hubby and I have never been bothered about sharing a bathroom (funny that, considering what follows). In the early days of our relationship, we even used to share a bath (save water, bath with a friend kind of thing). That was fun!

I’ve never been all that proud of my body, certainly not to the extent of wanting to show it off or strip in front of anyone I didn’t know. It was one of the reasons I used to hate shopping for clothes, even if they had individual curtained cubicles, though some had communal changing rooms where I felt exposed, embarrassed and extremely uncomfortable. Much better to do my shopping in the comfort of my home by mail order.

At grammar school, we had to change for PE (special kit) and there was no privacy whatsoever. Most times, it was compulsory to have a shower afterwards unless it was that time of the month when you were let off (as you were for swimming).
School showers were a series of 8 jets either side of a tiled ‘tunnel’.
Naked, you held your towel aloft and ran (or walked) through. Not really a problem I suppose except for a group of giggling first formers at the other end comparing your bits with theirs, and wondering when they were going to get boobs and body hair.
Add to that a teacher going on about being fat, overweight, or just plain S L O W, it was no wonder that I became ashamed of my body, and the fewer people who saw it, the better.
I wasn’t the only one who kept their knickers on AND their towel wrapped round them sometimes!

Men don’t seem that bothered though.

Hubby says when you’ve been in the Forces any dreams of privacy or inhibitions soon go straight out of the window.

I am a retired number cruncher with a vivid imagination and wacky sense of humour which extends to short stories and poetry. I love to cook and am a bit of a dog whisperer as I get on better with them than people sometimes! In November 2020, we lost our beloved Maggie who adopted us as a 7 week old pup in March 2005. We decided to have a photo put on canvas as we had for her predecessor Barney. We now have three pictures of our fur babies on the wall as we found a snapshot of Kizzy, my GSD when Hubby and I first met so had hers done too. On February 24th 2022 we were blessed to find Maya, a 13 week old GSD pup who has made her own place in our hearts. You can follow our training methods, photos and her growth in my blog posts. From 2014 to 2017 'Home' was a 41 foot narrow boat where we made strong friendships both on and off the water. We were close to nature enjoying swan and duck families for neighbours, and it was a fascinating chapter in our lives. We now reside in a small bungalow on the Lincolnshire coast where we have forged new friendships and interests.
View all posts by pensitivity101 →
This entry was posted in home, life afloat, Memories, My life, Uncategorized and tagged convenience, hygiene. Bookmark the permalink.