Are you a creature of habit?
Would you consider Habit and Routine to be one and the same?

Hubby and I both agree that the day doesn’t start until we’ve had that all important first cuppa.

Maggie is a creature of habit.
She has got into the routine of first wee and poo of the day between 6 and 7 am, breakfast (shares ours), nap, second wee (9 -10 am), car ride, third wee and second poo midday ish, nap, fourth wee 3 – 4pm, nap, tea time, fifth wee and maybe a final poo 7- 7.30pm,  final wee 9.30 – 10pm, bedtime.
Bear in mind her wees all coincide with walks now as we can’t exactly just let her out to do her business, she has to be taken.
There is however some variance, like walking into town instead of a car ride, or a long car ride after our second walk to visit our friend where she has fun with his golden retriever.

We too had our routines and habits.
Work days was the usual grind of get up, wash/shower etc, have breakfast, walk dog, go to work, have lunch, more work, come home (getting carved up and/or stuck in traffic), tea, watch TV, wash, clean teeth, bed. 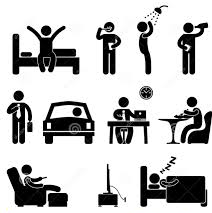 At the weekend, Saturday would be to visit one Mum and then do our shopping, and Sunday visit the other Mum to TAKE her shopping, and perhaps have a trip out to the forest with the dog in the afternoon.
From 2007, the routine was different, no visits to the Mums and no work, but plenty of dog walks, trips to the woods, and the occasional outing (with or without dog).

Now it’s different again, but habitual routine nonetheless.
For instance, Hubby will always use shower cubicle Number 3 in the gents, because it’s the only one with a little seat in it as well as a hook on the wall and a towel rail.
I am the same, as the ladies cubicle number 3 also has a seat, hook and towel rail, though it is by no means the largest cubicle (a difference of 4 inches/one floor tile each way).
I also tend to use the same loo too, but there is nothing special about it, apart from having a window and being furthest away from the door I guess.

But habits and routines can be hazardous, if not dangerous.
How many times do we seem to do things by remote control and not notice that something has changed, or drive to the office but can’t remember exactly how we got there?

And take this as a warning:
A customer of the bank from many years ago used to come in on specific days at the same time every week.
We suggested several times that he vary his times and days as a precaution, but he kept to his routine because it fitted in well with his working day, and he didn’t like the idea of entrusting someone else to do the banking.
Several weeks later, he was attacked in the street on the day he collected the wages. 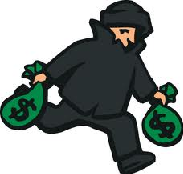 He was in hospital for 2 weeks, and was lucky not to lose his sight from the ammonia thrown in his face.
The mugger escaped with over £3000, but was caught shortly afterwards. Apparently he had been watching our customer for several months, and knew his exact movements to the extent of which days he paid in and the day he cashed the wages cheque.
Routine. Habit.
You can almost tell the time by it sometimes.

I am a retired number cruncher with a vivid imagination and wacky sense of humour which extends to short stories and poetry. I love to cook and am a bit of a dog whisperer as I get on better with them than people sometimes! In November 2020, we lost our beloved Maggie who adopted us as a 7 week old pup in March 2005. We decided to have a photo put on canvas as we had for her predecessor Barney. We now have three pictures of our fur babies on the wall as we found a snapshot of Kizzy, my GSD when Hubby and I first met so had hers done too. On February 24th 2022 we were blessed to find Maya, a 13 week old GSD pup who has made her own place in our hearts. You can follow our training methods, photos and her growth in my blog posts. From 2014 to 2017 'Home' was a 41 foot narrow boat where we made strong friendships both on and off the water. We were close to nature enjoying swan and duck families for neighbours, and it was a fascinating chapter in our lives. We now reside in a small bungalow on the Lincolnshire coast where we have forged new friendships and interests.
View all posts by pensitivity101 →
This entry was posted in change, Just a thought, observations, Opinions, Uncategorized and tagged danger, dog, habit, routine, shower cubicle. Bookmark the permalink.

1 Response to Creatures of Habit