The Power of One

I remember when the mechanic in the garage would service Dad’s car. He’d do everything, but these days, it’s all done by computer. The ‘engine technician’ just hooks the car up and plugs it in, twiddles a few knobs, tweaks and resets here and there, and voila. Done.
I know, very simplistic, but then I’m a girl and believe in KISS (keep it stupidly simple).

In the building trade, a builder did most aspects of the job, bar the electrics and gas.
That meant laying foundations, bricking, plastering, roofing, plumbing, any carpentry and tiling. Houses were allowed to ‘dry out’ for a few months before painting the woodwork, decorating with wallpapers and doing fancy ceilings. Not all that long ago they were being thrown up in a matter of weeks and lived in before the paint was dry.

My first job was in an office. I was 16 and became responsible for raising the paperwork for trade-in appliances, filing of said paperwork, and stamping either completed or cancelled dates in huge books (all manually I might add, and I was bored to tears).
Occasionally I got to answer the phone. Wow. Lucky me.
Those were also the days when the title ‘Fitter’ meant more than using a spanner or a hammer. He would deliver, disconnect, connect and remove whatever, having the job sheet, tools, trundle trolley and van to do it.

I read an article today about paperwork, and how a computer could only handle one change of circumstances at a time regarding an insurance policy.
Paperwork was produced for each change, which in turn was posted and delivered out of sync, causing confusion, frustration and a near heart attack for the writer.

It took me back to my office days when an update of operating procedures and staff titles resulted in a farce regarding the change of a gas meter.
Not just any old gas meter either. It was 1973, and this particular gas meter ran the LIGHTING of a house, which still worked!
Enter stage left:
Guy turns up to take away the meter that hadn’t been disconnected.
Enter stage right:
Another guy comes to connect the new meter that hadn’t been delivered.
Centre stage:
A third arrived to disconnect the old meter, but couldn’t because the new one wasn’t on site yet and he was afraid to leave ‘open and exposed pipes’.
Back stage supping tea in the dressing room:
The new one was scheduled to arrive the following day.

Working for the company and knowing how important it was for the family to move into their house that day (it was mine!) I got it done on a gas escape. One Fitter did the lot. 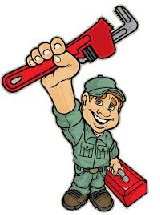 Sigh. Those were the days.

I am a retired number cruncher with a vivid imagination and wacky sense of humour which extends to short stories and poetry. I love to cook and am a bit of a dog whisperer as I get on better with them than people sometimes! We have recently lost our beloved dog Maggie who adopted us as a 7 week old pup in March 2005. We decided to have a photo put on canvas as we had for her predecessor Barney, and now have three pictures of our fur babies on the wall as we found a snapshot of my GSD so had hers done too. From 2014 to 2017 'Home' was a 41 foot narrow boat where we made strong friendships both on and off the water. We were close to nature enjoying swan and duck families for neighbours, and it was a fascinating chapter in our lives. We now reside in a small bungalow on the Lincolnshire coast where we have forged new friendships and interests.
View all posts by pensitivity101 →
This entry was posted in change, humour, Memories, Uncategorized and tagged building trade, gas, job, office, paerwork. Bookmark the permalink.
Loading Comments...
%d bloggers like this: