Our boat is a year old this month, and we are hearing quite a bit about its history.
From the broker who sold it to us, it was purchased for his daughter who didn’t like it, so he decided to sell it as he had another yacht, a large cruiser we believe.
Also according to the broker, the proceeds from the sale of the boat were going to pay off  the gentleman’s mortgage.

But, it has also been discovered that it was originally moored here, which was probably one of the reasons we were allowed a permanent residential berth as The Big Boss (and his staff) knew the boat, and were glad She was coming home.

I met the previous owner fleetingly the day we took possession, just enough to shake his hand as old owner to new rather than get his life history and inside leg measurement (people tend to talk to me about themselves for some reason).
I was surprised at his age, as I had envisioned someone in their late 50s like us, but this chap was well into his 70s. Very pleasant nonetheless.

Fast forward two weeks, and after talking to our new friends about boat maintenance and reliable people, I saw an important van in the car park and walked over to intoduce myself.
This guy is THE man to know about boats, especially if you get into trouble, either in the Marina or out on the water, and had been recommended by several people.
The funny thing is, he ALSO knows our boat (hence my interest) and informed us yesterday that the previous owner had never used it.
He had purchased it last August, berthed it here, then had it taken out of the water for hard standing over the winter (apparently you have to winterise and de-winterise your boat if you don’t use it).
In the spring, it was again ‘seen to’, put in the water and moved to the Marina brokerage in June which is where we saw it.

This would explain its prestine condition with only 37 hours on the engine.

So, we have basically got a brand new boat for a fraction of the price he paid for it last year.

Here are a few pics of the design from the internet: 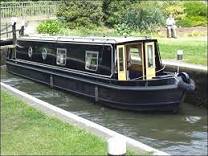 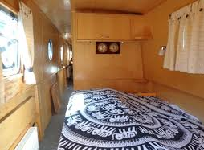 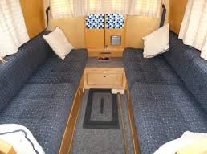 kitchen (but I have 2 cupboards under the sink)

This however, is our baby.

Forty one feet long (same as our previous house frontage) and a dear little 6 feet 10 inches wide (not as wide as our smallest bedroom) .
This is now Home.

I am a retired number cruncher with a vivid imagination and wacky sense of humour which extends to short stories and poetry. I love to cook and am a bit of a dog whisperer as I get on better with them than people sometimes! In November 2020, we lost our beloved Maggie who adopted us as a 7 week old pup in March 2005. We decided to have a photo put on canvas as we had for her predecessor Barney. We now have three pictures of our fur babies on the wall as we found a snapshot of Kizzy, my GSD when Hubby and I first met so had hers done too. On February 24th 2022 we were blessed to find Maya, a 13 week old GSD pup who has made her own place in our hearts. You can follow our training methods, photos and her growth in my blog posts. From 2014 to 2017 'Home' was a 41 foot narrow boat where we made strong friendships both on and off the water. We were close to nature enjoying swan and duck families for neighbours, and it was a fascinating chapter in our lives. We now reside in a small bungalow on the Lincolnshire coast where we have forged new friendships and interests.
View all posts by pensitivity101 →
This entry was posted in diary, home, life afloat, My life, narrow boat, Uncategorized and tagged boats, design, history. Bookmark the permalink.