I’ve got a big one now

Oh boy.
After a couple of months sharing Hubby’s laptop, I asked yesterday if I could replace my old tired one which is in storage at the moment (hinge on lid broken, pad on the enter key now missing, and one of the other keys is about to lose its identifying lettering soon). 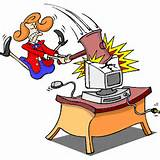 Secretly, I was (selfishly perhaps) getting tired of waiting for him to finish what he was doing, and then getting ratty because when it was my turn, he’d ask me to open another tab to look something up for him that he’d forgotten, or he needed my help doing something on the boat (I was hanging on to his feet this morning as he leaned over the side to clean off some algae on the rubbers he’d missed yesterday in the rain, so that was important), or he was bored and wanted to go out. Whenever he was engrossed, I’d read or write letters, or walk the dog, or just get bored.
Now I have a shiny new laptop (with CD rom in readiness for DVD watching) and can play to my heart’s content.

Except it’s not what I’m used to.
The keyboard is twice as big as his for a start, and the screen, oh the screen. It’s like looking at a widescreen cinema in comparison.
There are so many icons, and he confesses he doesn’t know what half of them are either as this is Windows 8. My old one has Windows XP, and his is Windows 7.
The first thing we did (once we found the setting menu) was turn off all the gizmos I’m unlikely to use (never heard of them actually).
Then we put on a virus checker. Vital bit of software that.

Next we changed the homepage, and then bookmarked a couple of pages (yep, my Blog is one!)
Now I can start putting my spreadsheets on and getting them up and running.
I have lost track of so much, so I can get things sorted so that as from Sept, I’ll be able to house or boat keep accounts properly.

Oh, and one other little thing…….. my Wi-Fi connection was a doddle.

I am a retired number cruncher with a vivid imagination and wacky sense of humour which extends to short stories and poetry. I love to cook and am a bit of a dog whisperer as I get on better with them than people sometimes! We have recently lost our beloved dog Maggie who adopted us as a 7 week old pup in March 2005. We decided to have a photo put on canvas as we had for her predecessor Barney, and now have three pictures of our fur babies on the wall as we found a snapshot of my GSD so had hers done too. From 2014 to 2017 'Home' was a 41 foot narrow boat where we made strong friendships both on and off the water. We were close to nature enjoying swan and duck families for neighbours, and it was a fascinating chapter in our lives. We now reside in a small bungalow on the Lincolnshire coast where we have forged new friendships and interests.
View all posts by pensitivity101 →
This entry was posted in budgets, life afloat. Bookmark the permalink.
Loading Comments...
%d bloggers like this: