Custodian of the bread

This morning I opened the ‘kitchen’ blind to see a swan and her cygnets floating majestically by.  This is not they (but I like this picture) as there were only 3 babies which were almost as large as the adult but still had their grey plumage.

Hubby had taken the dog out for her first walk just after 6am, which gave me space to get up, washed and dressed, and have breakfast on the go by the time he returned.
Already we have fallen into this routine as a matter of course rather than a matter of discipline.

Last night, there was a bit of commotion over a piece of bread floating in the water.
At first, Rooster Duck and her chums ignored it, but eventually, another mallard got whiff of it and pounced.
The result was hilarious as ducks descended from every possible direction to attack this Custodian and try to sink it in order to claim the prize.
Yes, mallard after mallard tried to sink this poor creature who was hanging on for dear life to her dinner.
I counted over 50 ducks in the vicinity of our boat, and must confess I have never seen so many in one place, not even in the parks in Dorset where as a child we would feed them on family outings at the weekends. 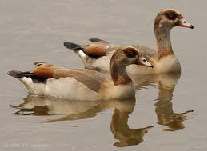 The two Egyptian ducks (not lookalikes after all) joined in the foray, but after getting their beaks pecked, backed off and watched from a safer distance. They seemed deep in duck conversation as they put their heads together, tilting gently from side to side as if summing up the situation, then deciding it wasn’t worth the effort and swam away.
Meanwhile, there was still a lot of flapping going on, and the bread was now in three pieces with a group of ducks going after each in a frenzy of feathers, squawks and quacking.

On the pontoon opposite us is a couple in a cruiser with a pair of dogs that resemble the Magic Roundabout’s Dougall with dreadlocks.
It’s difficult to tell which end to pet and which end to clear up after from a distance, and the only clue at the moment is when the female owner is walking them and they are ahead of her.
As I sit and write this, they are being groomed, and it looks to be quite a game, as if trying to undo the knots in a mop.
The dogs seem perfectly happy on the boat, though they do tend to bark a fair bit when people walk past.
We are so proud of Maggie as thus far she is alerted but does not voice her presence. It was one thing we were a little concerned about though she had never let us down in the tent.
She is doing rather well with it all actually, and like us seems more relaxed and enjoying the peace and quiet here.
She is more positive in letting us know when she wants to go out (it means little walkies after all) and again we are trying to stick to a routine which in turn will become habit.

This life is new to all of us, but so far, so good.

I am a retired number cruncher with a vivid imagination and wacky sense of humour which extends to short stories and poetry. I love to cook and am a bit of a dog whisperer as I get on better with them than people sometimes! We have recently lost our beloved dog Maggie who adopted us as a 7 week old pup in March 2005. We decided to have a photo put on canvas as we had for her predecessor Barney, and now have three pictures of our fur babies on the wall as we found a snapshot of my GSD so had hers done too. From 2014 to 2017 'Home' was a 41 foot narrow boat where we made strong friendships both on and off the water. We were close to nature enjoying swan and duck families for neighbours, and it was a fascinating chapter in our lives. We now reside in a small bungalow on the Lincolnshire coast where we have forged new friendships and interests.
View all posts by pensitivity101 →
This entry was posted in home, humour, life afloat, Marina, nature, observations and tagged ducks, food, punch up, squabble. Bookmark the permalink.

1 Response to Custodian of the bread