Hubby and I often refer to ourselves as The Light Relief, Double Act or Comedy Duo of the Day to somewhat bored checkout staff in the supermarket.
It seemed to become our mission in life to make at least one person smile every day, and at one stage you could hear the whispers passing down the checkout tills as we passed
‘Quick smile, or they’ll pick on you!’

Please don’t think we were making fun of the staff. Far from it.
Both Hubby and I agree that it must be a thankless and boring job for most of their shift, especially having witnessed customers in front of us in the queue who don’t say a word and totally ignore the person processing their purchases.
So we always chat, and when we are together, well, we tend to be ‘funny’.
We are also remembered and greeted like old friends in a lot of places where we shop regularly.
If the member of staff is wearing a name badge, we address them by name (after all, why else would they wear one) and they are always smiling, albeit perhaps in polite relief, when we leave. 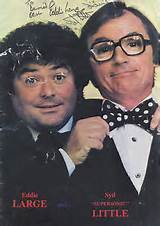 I grew up with Morecambe and Wise, Mike and Bernie Winters, and Little and Large.
Eric and Ernie were my favourites. Their Christmas shows were hysterical, and I can still see The Breakfast Sketch to The Stripper, Andre Previn and Eric’s version of Grieg’s Piano Concerto, and Shirley Bassey losing her shoe and them improvising with a hob nail boot. 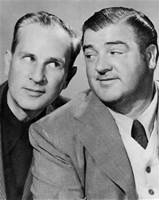 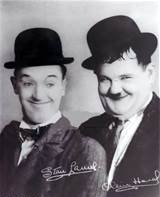 The generations before me had Abbot and Costello, Laurel and Hardy, Peter Cooke and Dudley Moore. The latter duo I could never warm to. 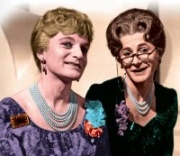 Another comedy pair were Hinge and Bracket, two retired ladies from the Music Hall Days who used to entertain ‘by request’.
Dr. Evadne Hinge and Dame Hilda Bracket were the stage personae of the female impersonation artists George Logan and Patrick Fyffe. Sadly Dame Hilda is no longer with us.

According to WIKI:
Logan and Fyffe played exclusively in drag and in falsetto, serving up the musical numbers in spinsterish bickering which formed the dynamic of the act. Logan acted as accompanist, arranger and foil for Fyffe’s vocal performances. Details of the ladies’ genteel lifestyle and theatrical history were shared with the audience for comic effect. In the spirit of authenticity, Logan and Fyffe enjoyed developing a detailed backdrop and life history for their stage personae.
Logan and Fyffe declined, for the duration of their stage partnership, to be interviewed out of character. In this way, they were consciously preserving the illusion for their following.
Their stage partnership spanned theatre, stage shows, radio and television, and continued for 30 years until the death of Patrick Fyffe in 2002. Logan retired from the stage in 2004.

Now you might be wondering why this has triggered my post today.
Well, it’s not that I consider Hubby and I to be the next Hinge and Bracket, but we regularly meet up with a couple of old boys who just might be!
One is approaching 80 and the other in his mid seventies. The younger, and much taller of the two, owns the dog which they walk together once a week, and the dog of course loves us because we always have biscuits.

We have dubbed them (with their knowledge and to their amusement) the Hinge and Bracket of the woods. They are a real comedy act, nearly always bickering and good company.

Today was no exception, as we covered the subjects of moving house, utility bills, computers and the internet, TV and the media, dentists, what it would be like to be rich and general finances, plus of course our dogs.
One accused the other of waffling who in turn retaliated that they would walk home in silence then if he didn’t want to listen.
Last week, when one rang the other to check that their walk was ‘on’, very little was said apparently, and the outcome was that he wouldn’t bother to call in future, and he could walk on his own!
When we saw them today we teased them that they were still friends then.

Relationships, friendships, acquaintances.
It’s so nice to make people smile, and to smile with other people. 🙂

I am a retired number cruncher with a vivid imagination and wacky sense of humour which extends to short stories and poetry. I love to cook and am a bit of a dog whisperer as I get on better with them than people sometimes! In November 2020, we lost our beloved Maggie who adopted us as a 7 week old pup in March 2005. We decided to have a photo put on canvas as we had for her predecessor Barney. We now have three pictures of our fur babies on the wall as we found a snapshot of Kizzy, my GSD when Hubby and I first met so had hers done too. On February 24th 2022 we were blessed to find Maya, a 13 week old GSD pup who has made her own place in our hearts. You can follow our training methods, photos and her growth in my blog posts. From 2014 to 2017 'Home' was a 41 foot narrow boat where we made strong friendships both on and off the water. We were close to nature enjoying swan and duck families for neighbours, and it was a fascinating chapter in our lives. We now reside in a small bungalow on the Lincolnshire coast where we have forged new friendships and interests.
View all posts by pensitivity101 →
This entry was posted in film/tv/book, Friend and Family, humour, music, My life, Opinions, Relationships and tagged acquaintances, comedy, dogs, famous double acts, woods. Bookmark the permalink.

4 Responses to It takes two