Maggie and I have had our two walks today. Hubby doesn’t like me walking her on my own at night, so like yesterday, I have made sure she’s had two long walks rather than one long and two short ones. Kind of evens things out.
I was early in the woods today. So were a lot of other people so I had to park in the main car park rather than our favoured lay-by.

I would think this photograph was taken years ago because I can’t remember it ever looking like this. Take away the bush on the right in front of the gate and notice board, and that’s where I parked. Most of the trees have been cut back now, and those in the distance aren’t there at all anymore. The bushes lining the path beyond the gate are also no more, in fact last year it was there that all the cut timber was stacked on both sides of the track. Also the car park surface is nothing but a mass of pot holes again, yet when the forestry lorries were there, it was kept in good repair. Cheaper to keep the surface in good condition than have the expense of recovering a huge vehicle with a broken axle I suppose.

Maggie and I did the bottom route today. The dirt path is nothing but a mess of big doggies poo and it was almost an olympic slalom event (without the skis)  avoiding it all.
I met up with Hank, a shy golden labrador who remembered the biscuit pocket, so he didn’t stay shy for long. Maggie was extremely protective of me though, so rather than push my luck as her Elvis impression was getting a good workout, his owners and I exchanged a few pleasantries, then continued on our separate ways.
I met a few other regulars, but for the most part, Maggie and I were on our own to plod and enjoy whatever was going on. I could hear the ‘chit chit’ of a wren, the excited chatter of blackbirds, tits and chaffinches, and the cooing of pigeons in the trees, though I didn’t actually see any of them!
Fallen trees have new markings to indicate where the next cuts are to be made, as their centres will be removed and dragged to one side rather than get the heavy machinery in again to move the entire tree.

In contrast, this afternoon’s walk was much more eventful.

As yesterday, I decided to walk up to the lane and along the ditch. It’s about half a mile on the main road from our house, so good lead work for Maggie, then I can let her off and she can sniff to her heart’s content along the bank on one side or the fields on the other.
The lane is just under two miles long, so there and back is a good walk for us but I only managed half way today.
I noticed a tired bee on the pavement, and put some wild flowers near its nose hoping it would feed and regain its strength.

There were four swans on the water, snowy white against the greeny grey sludge floating on the top. This could well have been the 2 adults and their young from last summer.
A pair of mallards were also in close proximity, and further up as I made a mental note to pick one of the daffodils on the way back for the bee, a grey heron took flight.

They are not the most elegant of birds taking off, but once airborne, they have a certain charm in a dangly leggy sort of way. This one was quite big, and I wondered where his mate was as there are usually two here. A little while ago, we saw an egret, but it may have been just visiting as it was the first time we’d seen one in this particular area. The greylag geese will be back soon though.

Sadly evidence of an unlucky frog was squished on the tarmac. Not the victim of a walker’s boot, but some large vehicle if the tyre tread was anything to go by. Although this is a single track lane, it can get quite busy as it’s as good short cut from one small village to ours.

A spitfire was practicing its air display for the forthcoming Bank Holiday air show and I felt like an extra in a WW2 film as it soared and dived in a grey muggy sky above me. We have seen aerobatics and formation flying over the fields here.

Several years ago, the newly restored Vulcan flew overhead, and the noise (and sight) was totally awesome. The old planes are so much more interesting and majestic than the jets of today. The wingspan of a spitfire is more than that of a typhoon (aka eurofighter) , and three years ago, the highlight of a show was a Spitfire and Typhoon dogfight. We got to see the lot for free as it was local air space they practiced in!
The Red Arrows were doing their stuff here a fortnight ago.

Before turning back, I noticed a buzzard riding the air thermals, silent and graceful. 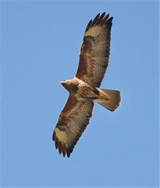 It took me back to our previous house where we had one regularly visit our garage roof, often using the lamp-post on the main road below our back garden as a sentry post. ‘Claude’ was very partial to smoked bacon, and on one occasion flew directly past our kitchen window, sat on the front wall and stared at me through the glass as if to say ‘Where’s my breakfast?’ .
Beautiful bird, lovely markings.

I picked my daffodil, and close to the main road put Maggie on her lead, making her sit so that I could attend to the bee. It seemed a bit more active than our first encounter, so I pushed the trumpet as close as possible, and he practically climbed inside.
Several vehicles came up behind me from the lane having to stop at the junction. Two drivers showed concern at the woman with her dog seemingly poking at the ground with her backside stuck in the air. One asked if I was OK and when I said I was tending a bee, he smiled knowingly, probably thought ‘OK, obviously a loonie’, and drove off.
I don’t care.
As I was walking home, I hoped the little buzzer recovered sufficiently to continue on its journey or at least get to a better food source. Gotta look after the bees. 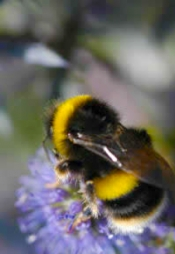 I am a retired number cruncher with a vivid imagination and wacky sense of humour which extends to short stories and poetry. I love to cook and am a bit of a dog whisperer as I get on better with them than people sometimes! We have recently lost our beloved dog Maggie who adopted us as a 7 week old pup in March 2005. We decided to have a photo put on canvas as we had for her predecessor Barney, and now have three pictures of our fur babies on the wall as we found a snapshot of my GSD so had hers done too. From 2014 to 2017 'Home' was a 41 foot narrow boat where we made strong friendships both on and off the water. We were close to nature enjoying swan and duck families for neighbours, and it was a fascinating chapter in our lives. We now reside in a small bungalow on the Lincolnshire coast where we have forged new friendships and interests.
View all posts by pensitivity101 →
This entry was posted in Dogs, My life, nature, Uncategorized and tagged birds, dogs, lane, nature, UK, walks, woods. Bookmark the permalink.