It was mother in law’s birthday, and as Hubby was away on a course, I thought I’d take her out to lunch. I gave her the choice of venue, knowing she liked the local carvery, and fully expected her to want to go there.
I was really surprised then that she requested we go to a recently revamped pub about 2 miles down the road from where she lived. I was however a little annoyed to discover she had invited her daughter to join us, but it was her birthday after all, so I thought we’d make it a ‘girlie day’. 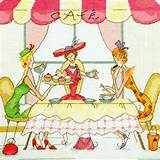 I met them there as I had to come from the opposite direction.
We were shown to a table by the window and given individual menus. Pretty pricey for what was on offer, and in all honesty, not very impressive in my opinion.
Mum settled for a breaded chicken breast in a bun with side salad and fries.

I had scampi and chips, and sister in law opted for a large prawn cocktail.
Mum left the bun, had one bite out of the chicken breast, and left the oven chips as they weren’t cooked properly. The salad lay limp and untouched.
My meal was OK but not spectacular, and there seemed to be more sauce than prawns in the prawn cocktail, or maybe they had just used one prawn to live up to the title.
Desserts were limited as cheesecake (my choice) and apple pie with cream (Mum’s choice) were not available. The alternatives were vanilla ice cream, a messy portion of trifle or slice of arctic roll, so judging by the standard of our meals and as sister in law didn’t want anything else, we didn’t bother.

The total bill was just over £30 including our soft drinks, which sister in law insisted on paying. I offered to pay half, after all, the lunch had been my idea, but she was adamant. To be truthful, it actually suited me as I would not have been happy paying to fill the dumpster out back.

Normally, I would have complained (or asked for the burger to be put in a doggy bag) but I was ‘in company’ so didn’t think it was my place to make a fuss and spoil Mum’s day.
As we were leaving, Mum told me she wished we’d gone to the carvery, which had been her first choice, but sister in law had wanted to try the new place.
Judging by the look on her face, this apparently was news to sister in law.

The following year on Mothers Day, we decided to take both Mums out for a carvery meal and once again sister in law ‘got invited’. Whilst the four of us had the traditional roast, sister in law had a non meat option which was ordered separately.

Mum in law decided on gammon but also wanted the biggest yorkshire pudding which was at the bottom of the pile. The young chef was happy to oblige and she ended up having to put her choice of vegetables inside it as there was no room on the plate for them after helping herself to the roast potatoes.

When my Mum, Hubby and I got back to the table, our plates were equally loaded but with more variety than volume. His Mum wanted to know how come we had a slice of all three meats, so we told her we’d simply asked, to which she answered
‘Oh. I didn’t know you could do that’.
Sister in law’s meal arrived as we sat down so we all enjoyed our choices and had a pleasant dinner.
Whilst 4 plates were completely cleared, one fractionally eaten yorkshire pudding, a fair amount of veg and 2 roast potatoes on the fifth were returned to the kitchen for disposal.

Hubby is very partial to custard. He is also very fond of treacle pudding, so he was in his element as the carvery did this with what they termed a ‘bottomless jug’ of custard. Basically, as long as you had dessert on your plate, you could have as many helpings of custard as you wished.

He took FULL advantage, though a lot of huffing was coming from the other side of the table when he asked for a fourth helping as she tucked into her apple pie and cream. My Mum and I both opted for the ice cream sundaes. They are positively huge, absolutely delicious and we attacked them like a couple of big kids (more huffing) .

Again sister in law didn’t want a dessert, so either vegetarian meals are very filling, she hasn’t got a sweet tooth or she doesn’t eat much. Three empty dishes, one with no trace of custard whatsoever, and the fourth with half of the apple pie (no cream) went back to the kitchen.

The total bill, including our drinks, was just under £45. I didn’t mind paying that at all,  as the beauty of the carvery is that you get a main course and dessert for a fixed price rather than the a la carte which was priced individually. Besides, sister in law had paid last time, so this was returning the favour.
Mum in law got her purse out, and I told her to put it away as we had invited her, so the onus was on us to settle the bill. She started to make a fuss, so I smiled, put my hand firmly over hers (and the purse) and said quietly
‘No Mum. The meal is on us. Please don’t argue about it. You’ll embarrass us.’
So she didn’t.

Footnote:
We later discovered that sister in law had forgotten on both occasions, and when it had been mentioned that we were taking her Mum out for a meal, she made it sound as if she had intended to do the same but we’d beaten her to it.
I have more fingers than the number of times I’ve met her.

I am a retired number cruncher with a vivid imagination and wacky sense of humour which extends to short stories and poetry. I love to cook and am a bit of a dog whisperer as I get on better with them than people sometimes! We have recently lost our beloved dog Maggie who adopted us as a 7 week old pup in March 2005. We decided to have a photo put on canvas as we had for her predecessor Barney, and now have three pictures of our fur babies on the wall as we found a snapshot of my GSD so had hers done too. From 2014 to 2017 'Home' was a 41 foot narrow boat where we made strong friendships both on and off the water. We were close to nature enjoying swan and duck families for neighbours, and it was a fascinating chapter in our lives. We now reside in a small bungalow on the Lincolnshire coast where we have forged new friendships and interests.
View all posts by pensitivity101 →
This entry was posted in budgets, food, Friend and Family, My life, Opinions, Uncategorized and tagged birthday, carvery, custard, eating out, family, food, Mother's Day, pub. Bookmark the permalink.