Once in a life Time

I woke up this morning, and as is my usual habit, automatically looked at the illuminated display on our digital clock radio. It was early. Five thirty to be exact, but according to the dog’s body clock, it was time for a wee.

Whenever I visited my parents and stayed over, I slept on the floor in their lounge. The timer for their central heating was a ticker, a steady one second interval click, comforting in its way as it lulled me to sleep.
In their dining room, the old Westminster chime clock was still sitting on the piano and every fifteen minutes would sing out its quartered melodies then bong the relevant number on the hour. It was strange how it stopped at the exact time my Grandfather died, and despite being fully wound, didn’t start again for another twenty four hours.

My first alarm clock was the old fashioned ear muff type, but there was nothing muffled about it when it went off in the mornings. 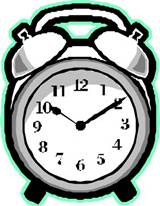 In those days, the only Time that registered was time to get up, go to school/work, eat, hang out with my friends and sleep. When you’re 16 and the millennium is 27 years away, it’s not in your top ten things to think about. When said millennium is now 14 years behind you, well, the fastness of it passing, Time is always on your mind.

This must be one of the most misused, misunderstood or perhaps flexible words in our language.
Once Upon A Time in the fairy tales is oh so very long ago, but put a Time line in our own lives, and it can be just a few seconds.
Look it up on the internet and you become bogged down with the scientifics of dimensions and long winded explanations, so I opted for this from MathsIsFun.com
Time is the ongoing sequence of events taking place. The past, present and future.
We measure time using seconds, minutes, hours, days, weeks, months and years.

Nice, simplistic definition of something we all take for granted.
But think about the references we make to Time, each and every day. Have you ever stopped to really think about it? I mean, given it a second thought (sorry) .

We ask someone to ‘Hang on a minute,’ or say ‘I’ll be with you in a sec‘, but in the true definition of Time, is that waiting period 60 or one second respectively? Unlikely, as Time in these instances can be of any duration, regardless of what we said.
Women talk about their Body Clocks and time running out to start a family (men don’t have this problem though do they) , and we speak of ‘making time’ when really all we’re doing is improving our time management skills.

Time waits for No-One is so very true.
We cannot stop it. Even if our clocks or watches stop, that’s just the mechanics.
When we are children, a year seems such a long time, but as an adult, it’s not long enough. So much to do, so little time. Tick tock, tick tock. Always busy, always on the go.
I wonder wherever I found the Time to hold down a full time job, let alone another 3 evenings a week. My days are filled with different things now, but the hours fly by and before I know it, another day is over. Then a week, and now another month as we say goodbye to February.

We may share experiences, but each will remember it differently. The song “I remember it well” from the 1958 film Gigi sums this up perfectly, even if it was from an entertainment point of view:

“We met at nine (we met at eight), I was on time (no, you were late)“
Lyrics by : Alan Jay Lerner / Frederick Loewe

I read a headline not so long ago that they believe Time Travel is possible. Whether it involves a DeLorean travelling at 88 miles an hour with the help of a flux capacitor wasn’t mentioned, but on the same day, it was announced that they plan to do a musical of Back to The Future  (at least the 60s music should be good) .

Each second is unique. It cannot be duplicated. It is a once in a lifetime moment that is immediately lost. As such, it is also precious. So very precious. Those miraculous baby’s first steps, word, laugh. All wonderful fragments of Time.
On the other hand, the sadness, regret and sorrow at not saying what we should, wanted or needed to, and then suddenly finding it’s too late.

However you decide to use your Time, don’t waste it.
Say what’s important, and tell those that matter you love them.
There may never be a Right Time, so don’t wait for it.

I am a retired number cruncher with a vivid imagination and wacky sense of humour which extends to short stories and poetry. I love to cook and am a bit of a dog whisperer as I get on better with them than people sometimes! In November 2020, we lost our beloved Maggie who adopted us as a 7 week old pup in March 2005. We decided to have a photo put on canvas as we had for her predecessor Barney. We now have three pictures of our fur babies on the wall as we found a snapshot of Kizzy, my GSD when Hubby and I first met so had hers done too. On February 24th 2022 we were blessed to find Maya, a 13 week old GSD pup who has made her own place in our hearts. You can follow our training methods, photos and her growth in my blog posts. From 2014 to 2017 'Home' was a 41 foot narrow boat where we made strong friendships both on and off the water. We were close to nature enjoying swan and duck families for neighbours, and it was a fascinating chapter in our lives. We now reside in a small bungalow on the Lincolnshire coast where we have forged new friendships and interests.
View all posts by pensitivity101 →
This entry was posted in film/tv/book, Just a thought, My life, Opinions, Relationships, Uncategorized and tagged life, love, memories, precious, time, work. Bookmark the permalink.

13 Responses to Once in a life Time