When my Mum had her first knee replacement, my Dad surprised her by not only making cups of tea and cooking her meals, but also doing the housework.

I wrote a poem about her operation, entitled The Search for Mum’s Brain, and not so long ago, she read it out to her ladies group at a Show and Tell afternoon. It was very well received apparently.

Although I am getting about OK, there are so many ‘little things’ that I’m finding difficult. Like making myself a cup of tea. I can’t carry it back to the comfort of my chair, so it means standing in a cold kitchen to drink it. Hubby has been marvellous and when he goes out with the dog, makes sure I have a fresh cuppa by my side to save me the trouble. He also made sure there were new batteries in the DVD remote.

Today was wash day. Like our meals, we don’t have a specific day for washing. When we are down to our last pair of socks and knickers, then we wash. Sounds bad doesn’t it, but when you put it in perspective, we do the laundry once, maybe twice, a week as we don’t own that many pairs of either (apart from new stuff being held in reserve) .

It’s a lovely sunny day, but with winds up to 60mph, any washing out on the line would end up doing impressions of weather balloons, so I’m afraid it will be a tumble drier job up at the launderette. Something else I won’t be able to help Hubby with.
The wind has kept up all night actually. I have been praying that we have no more broken fence panels to see to as it would be difficult for Hubby to do it on his own. At the moment, all is looking good, but he has noticed a weak spot that needs attention. No doubt he will be out there with hammer and nails as soon as the wind drops.

I heard him cursing the hoover today as he’s never been able to get on with an upright. The cylinder model is in the shed as we use it for cleaning the cars (I may have mentioned before that we have His and Hers hoovers) .

Saying that though, the house is clean, the washing up done from breakfast, and everything put away tidily. I remember one day being in the queue in a clothes shop in town and one of their tills had broken down. Somehow, the subject of men and their uses came up. I said that mine was very good in the home and I’d be prepared to hire him out for £5 an hour. The queue for his services was longer than that for the till, and he was blushing furiously trying to hide behind the slippers.

When I used the bathroom this morning, I noticed there had been some minor modifications. Our airier (the folding thingie usually tucked away in the larder) was sitting in the bath with our face cloths and towels on it. 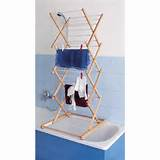 Note: This was the closest picture I could find on Google, but our airer was actually IN the bath, not on it as shown.

The bath is adjacent to the sink. The towel rail above the radiator is not. I can prop the crutches up alongside the loo, have my morning wash etc, and not have to overstretch to reach anything.

Yesterday may have been Valentine’s Day (and the meal was VERY nice a la Hubby), but it’s little things like this that let me know how much he cares. Every day.

It was also weigh-in day today (recorded once a week) and I managed to get on the scales without too much difficulty. I was really pleased as I’ve lost 2 kilos.

You could say using the crutches is not only toning up my muscles, but burning extra calories with the effort. In truth it’s because the kitchen is like the bathroom.
At the other end of the bungalow!

I am a retired number cruncher with a vivid imagination and wacky sense of humour which extends to short stories and poetry. I love to cook and am a bit of a dog whisperer as I get on better with them than people sometimes! In November 2020, we lost our beloved Maggie who adopted us as a 7 week old pup in March 2005. We decided to have a photo put on canvas as we had for her predecessor Barney. We now have three pictures of our fur babies on the wall as we found a snapshot of Kizzy, my GSD when Hubby and I first met so had hers done too. On February 24th 2022 we were blessed to find Maya, a 13 week old GSD pup who has made her own place in our hearts. You can follow our training methods, photos and her growth in my blog posts. From 2014 to 2017 'Home' was a 41 foot narrow boat where we made strong friendships both on and off the water. We were close to nature enjoying swan and duck families for neighbours, and it was a fascinating chapter in our lives. We now reside in a small bungalow on the Lincolnshire coast where we have forged new friendships and interests.
View all posts by pensitivity101 →
This entry was posted in food, humour, My life, Relationships, Uncategorized and tagged care, housework, laundry, Valentine's Day, weather. Bookmark the permalink.

1 Response to It’s the Little Things