She sat alone in her room, waiting.

Her chair, but not her favourite chair.

Her room, but not her room. The angles were different and the window didn’t let in the afternoon sun.

She was surrounded by familiar things. Her things, but not everything. The TV sat on a cupboard that was not familiar, and her comfortable settee had been replaced with a bed. Her bed, but not her bed. The mattress did not conform to her shape, but the linens thereon were hers, though the washing powder fragrance was not.

The toiletries in her bathroom were perfectly adequate, but not her preferred brand. When she washed herself, there were no lathery bubbles or lingering scent. She did not recognise the face that looked back at her from the tiny mirror in a bathroom that was not hers.

The clothes she wore were hers, but not of her choosing. Days of many wardrobe choices were now long gone. No wardrobe at all now, just a built in closet with one shelf and one hanging rail.

The photographs on her nightstand were faded. Family. Her family, her children. The Preferred One she’d trusted with her well being. Manipulation, deceit and desertion.

Lies, half truths and accusations. By her own doing, she was now dead to the One Person who could have saved her from this life.

Home, but not her home. This would never be ‘Home’, just as this room would only ever be a room, but not hers.

On the other side of the door she could hear the bustle of people as they went about their business.

She was their business, but just one of many.

Many others, who like her, sat in their room. Waiting.

Waiting for the lunch trolley to pass. To her, it meant a little company, if only for a few moments. 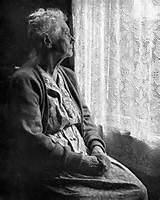 I am a retired number cruncher with a vivid imagination and wacky sense of humour which extends to short stories and poetry. I love to cook and am a bit of a dog whisperer as I get on better with them than people sometimes! We have recently lost our beloved dog Maggie who adopted us as a 7 week old pup in March 2005. We decided to have a photo put on canvas as we had for her predecessor Barney, and now have three pictures of our fur babies on the wall as we found a snapshot of my GSD so had hers done too. From 2014 to 2017 'Home' was a 41 foot narrow boat where we made strong friendships both on and off the water. We were close to nature enjoying swan and duck families for neighbours, and it was a fascinating chapter in our lives. We now reside in a small bungalow on the Lincolnshire coast where we have forged new friendships and interests.
View all posts by pensitivity101 →
This entry was posted in fiction, short stories, Uncategorized and tagged alone, business, company, familiarity, family, home, living. Bookmark the permalink.