I had no idea what I was going to do for my post today, until I woke up.

What gave me inspiration? The weather? News on the radio? Hubby?

Nope, none of the above.

It was cold last night. I know that because the dog was curled up tight between hubby and I leaving neither of us with much in the way of covers. Now I know many of you will shudder at the thought of allowing the dog to sleep on our bed, but we are not alone in doing that, having membership to the 46% Club of Pet Owners that allow it.

Have you ever been fascinated by the positions our mutts get themselves into in slumber? If we tried it, we’d either break our necks or our backs, and possibly have difficulty walking next day.

I could bombard you with puppy pics of mega cuteness as believe me there are THOUSANDS to choose from, however, here are a few from the internet that I can relate to dogs I’ve owned.

This is what we’d term as The Fox.

Our previous dog was a tri-colour border collie and had a bushy tail. He would very often sleep like this but we would be unable to tell where his face started and his tail finished as the colours all blended nicely into each other like a permanent flow chart.

This is your basic Hearthrug impression.

Maggie curls up in her basket like this, but takes it one step further by pressing her back toes up against her nostrils as if she’s sucking her ‘thumb’.

We’d refer to these as the Pure Bliss.

These dogs are perfectly content and comfortable to the extent that they are exposing their bellies in the utmost of trust and vulnerability positions, albeit at a subconscious level.

There is a similar position to the above that we labelled The Titanic. The dog is flat on their back, but has one front leg reaching upwards. This gradually relaxes and comes down to chest level only to be raised again over several repetitions as doggy dreams on.

And finally, this is the TTP (Taking the P…) position: 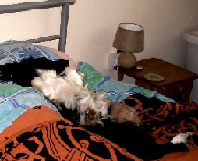 Yep, this is our mutt, bless her.

I am a retired number cruncher with a vivid imagination and wacky sense of humour which extends to short stories and poetry. I love to cook and am a bit of a dog whisperer as I get on better with them than people sometimes! In November 2020, we lost our beloved Maggie who adopted us as a 7 week old pup in March 2005. We decided to have a photo put on canvas as we had for her predecessor Barney. We now have three pictures of our fur babies on the wall as we found a snapshot of Kizzy, my GSD when Hubby and I first met so had hers done too. On February 24th 2022 we were blessed to find Maya, a 13 week old GSD pup who has made her own place in our hearts. You can follow our training methods, photos and her growth in my blog posts. From 2014 to 2017 'Home' was a 41 foot narrow boat where we made strong friendships both on and off the water. We were close to nature enjoying swan and duck families for neighbours, and it was a fascinating chapter in our lives. We now reside in a small bungalow on the Lincolnshire coast where we have forged new friendships and interests.
View all posts by pensitivity101 →
This entry was posted in Friend and Family, humour, My life, Uncategorized and tagged dogs, positions, sleep. Bookmark the permalink.