They’re not all bad

Cynophobia- Fear of dogs or rabies

I love dogs, and knowing how much they can enhance your life, I feel sorry for anyone who suffers some kind of fear of them. Be it dogs in general, specific breeds, or the result of some traumatic experience involving them, I can and do both appreciate and respect reasons behind this fear. However, this post is not intended to solve your phobia, but more to share my mother’s.

For as far back as I can remember, my Mum had always been afraid of German Shepherds. It was one of the reasons my Dad never fulfilled his dream of owning a white one, and any dogs that came into the family home were usually smaller heinz varieties.

When my sister was a toddler, apparently she disappeared one afternoon having been able to crawl out under the front gate. (As she is several years older than me, this is one of the family tales I have to take on faith.) This must be every parent’s nightmare and naturally the family were in a panic, especially as no-one could find any trace of her whereabouts. A search ensued, and two hours later she was found fast asleep curled up in next door’s dog kennel with their german shepherd. It took a fair while to calm my mother down and obviously made her fear of the breed treble.

I’m a firm believer that it’s not the dog but the owner who is responsible for the way a dog turns out. I have my own ‘twitchy’ breeds and preferences, but in most cases, dogs love me regardless of size. We were walking in town one day and saw a couple with 2 rather large and fluffy GSDs on leads. It was like the parting of the Red Sea the way people moved out of the way. As always, I asked if I could say ‘Hi’ and both dogs were as soft a pan of dough, not a ferocious bone in their body. I’ve experienced the same with dobermans, rottweillers and mastiffs, and provided you make no sudden jerky or threatening movements, dogs are usually more curious than aggressive. Saying that though, if a dog does not want to know, I won’t push the point, yet if time permits, eventually their curiosity gets the better of them and they will come to me on their own. 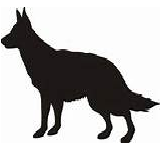 I have had 2 german shepherds, both pedigree, and have always loved the breed. My first was already in residence of a family I lived with for several years, and when visiting my family one weekend, I had no choice but to take her with me. I was extremely nervous about my Mum, but she said she’d be OK so long as she was never left alone with it. The dog was used to young children and had a wonderful temperment, so if my nieces and nephews turned up, there wouldn’t be any cause for alarm. My parents had lost their dog about 2 years before, so I didn’t have to worry about another canine in the house and territory violations either. I slept in my old room and kept the dog with me.

On the third morning, I woke up to find my bedroom door ajar, and no dog. I quickly grabbed a robe and rushed downstairs. The kitchen door was closed, but through the frosted glass I made out a shape on the floor and thought the worst. That was until I heard the following:

I gently opened the door and saw my Mum on her knees with her arms draped around my dog’s shoulders giving her the biggest cuddle imaginable.

Mum looked up at me and grinned.

‘I can’t believe I’ve been so silly all these years,’ she said.

I told her she wasn’t being silly, and that it was just one of those myths that the breed had got tagged with.

The first American guide dog (or Seeing Eye dog as they were called then) was a GSD called ‘Kiss’ that was trained by Dorothy Harrison Eustis in Switzerland. Her twenty year old owner Morris Frank (1908-1980) renamed her Buddy, and his story is told in a film called Love Leads the Way, starring Timothy Bottoms. If you can get hold of a copy, invest in a big box of tissues too.

Today there are a variety of aid and assistant dogs. They are intelligent and loyal companions for many whose lives could otherwise be restricted. It’s not a ‘trick’ to show your owner the phone is ringing, there’s someone at the door, or lending a helping paw to load the washing machine. It’s months of dedicated training and associating each animal with a specific owner in mind. Not all dogs deserve the bad press they get.

I am a retired number cruncher with a vivid imagination and wacky sense of humour which extends to short stories and poetry. I love to cook and am a bit of a dog whisperer as I get on better with them than people sometimes! In November 2020, we lost our beloved Maggie who adopted us as a 7 week old pup in March 2005. We decided to have a photo put on canvas as we had for her predecessor Barney. We now have three pictures of our fur babies on the wall as we found a snapshot of Kizzy, my GSD when Hubby and I first met so had hers done too. On February 24th 2022 we were blessed to find Maya, a 13 week old GSD pup who has made her own place in our hearts. You can follow our training methods, photos and her growth in my blog posts. From 2014 to 2017 'Home' was a 41 foot narrow boat where we made strong friendships both on and off the water. We were close to nature enjoying swan and duck families for neighbours, and it was a fascinating chapter in our lives. We now reside in a small bungalow on the Lincolnshire coast where we have forged new friendships and interests.
View all posts by pensitivity101 →
This entry was posted in fears and phobias and tagged buddy, dog, family, gsd, phobia, training. Bookmark the permalink.

4 Responses to They’re not all bad