My first encounter with a warm fresh egg was at my uncle’s farm in Gloucestershire in 1960, and I cried because the shell broke when I washed it. He also kept pigs but when the sow went crazy and killed all her young, he switched to sheep. In the 70s, they kept a cow too so that they had fresh milk every day and my aunt made her own butter. Uncle would often go off early in the morning with his gun and Jet, their black labrador, later coming back with a couple of rabbits for the pot. They also had Betty, a permanently bad tempered goose and she was the much better guard dog!

My paternal grandfather had chickens too, but he lived in a council house so it was totally different from the country. Every time we visited I would rush down to the bottom of the garden and check the nesting boxes for eggs. I can’t remember how many chickens he had, but their run was the whole width of the garden with a henhouse at one side, a door more or less in the middle and was fully enclosed by mesh. Their food was kept in large dustbins and positively stank on damp days, but they had the potato and other vegetable peelings thrown in as well, so they had a bit of variety. They didn’t seem to mind being shut in all the time, and as Gramps didn’t have a cockerell, there was no likelihood of any chicks. I think I was a bit disappointed at that. If ever there was a tiny egg though, it was always left for me to have for my breakfast.

When we moved here 6 years ago, we were given 5 ex-battery hens along with a second hand henhouse as a house warming gift. They were pathetic, almost bald, scrawny creatures, but we were assured they would ‘fluff up’ OK. Following some advice given in a basic ‘How to Keep Chickens’ book, we attached dog fur to the wire of their enclosure, then so as not to offend our neighbour (not that she should have been looking over our six foot fence in the first place), my husband waited until dark and urinated round the perimeter as apparently foxes didn’t like the smell. I guess it worked, as we never had a problem! 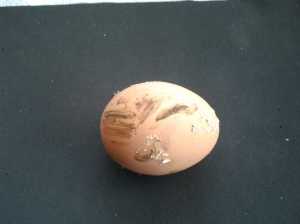 We had our first egg the following day, even though our girls were a little timid in their new surroundings. We fed them on a dried mash bought from the farm wholesaler, and decided to sell any surplus eggs to cover their keep. Eventually, our little brood got quite brave and we decided to let them loose in the garden, though they would still be herded into the henhouse and secured at night. During the day, every time I went outside, they would come rushing up to me like a litter of puppies. They each had their own personality but we decided not to name them, as we didn’t want to get too attached. However, despite our best intentions, one in particular and who happened to be the baldest, got nicknamed Scraggy. She actually developed the best plummage of the lot and was quite magnificent. She also managed to escape through a hole in the fence we didn’t even know was there, so while hubby was fixing that, I nipped next door to retrieve her. Luckily, their garden was fully enclosed, and with his help and a broom, I was able to catch her. She snuggled into my armpit and promptly fell asleep. Daft bird.

As time went on, we wondered if our ‘gift’ had been a joke as we hadn’t realised or been warned they could be so destructive and our back lawn was soon just patches of scratched earth. We started finding eggs under the trees and bushes instead of in the nesting boxes, and the dog wouldn’t pee in the garden anymore because they pecked her bum! (Just a little note here before you get the wrong idea, she never did her business indoors instead but waited until we were out on our walks.)

We compromised, and sectioned off part of the garden completely so that they could scratch away to their hearts content without doing any damage to the bits that mattered, ie: Our veg patch! However, they were a bigger tie than the dog as we couldn’t take them with us if we wanted to go away, and getting up at first light and having to be put to bed when it got dark meant 4am and 10.30pm in the summer! Still, it was worth it in a way as we fully appreciated the taste of fresh eggs and my cakes and other baking tasted totally different.

Sadly, we lost one to ill health after about 6 months, but the other 4 did us proud and in the 15 months we had them, they supplied us with 1263 eggs. We made a sash and paper crown for Egg 1000, and you’re probably thinking how sad, but for us it was a kind of milestone which we felt had to be recognised.

Chickens go ‘off lay’ at times, but eventually the eggs stopped coming altogether and it’s totally impractical keeping chickens then having to buy eggs. Being battery hens, there was no meat on them, not that we ever intended them for the table anyway. When we lost another and were down to just three, it was easier to rehome them as a little group rather than wait until there was only one left, as it was unlikely to be accepted in an established flock (hens can be quite vicious to outsiders). We were lucky to be able to retire them, and their hut, to a local small holding, where they became the personal harem of a lonely one eyed rooster. They kept going for a further year or so and Scraggy was the last to go, being found ‘asleep’ in the nesting box one morning.

It was an enjoyable and rewarding experience, but now that we have the garden back to normal, the dog has got her confidence (and pride) back, and the veg patch is more productive as it’s been extended, it’s something that we’d probably not consider again here.

I am a retired number cruncher with a vivid imagination and wacky sense of humour which extends to short stories and poetry. I love to cook and am a bit of a dog whisperer as I get on better with them than people sometimes! We have recently lost our beloved dog Maggie who adopted us as a 7 week old pup in March 2005. We decided to have a photo put on canvas as we had for her predecessor Barney, and now have three pictures of our fur babies on the wall as we found a snapshot of my GSD so had hers done too. From 2014 to 2017 'Home' was a 41 foot narrow boat where we made strong friendships both on and off the water. We were close to nature enjoying swan and duck families for neighbours, and it was a fascinating chapter in our lives. We now reside in a small bungalow on the Lincolnshire coast where we have forged new friendships and interests.
View all posts by pensitivity101 →
This entry was posted in food and tagged cakes, chickens, dog, eggs, farm, garden, henhouse. Bookmark the permalink.